Ten percent of the sales went to benefit the Food Allergy Initiative. 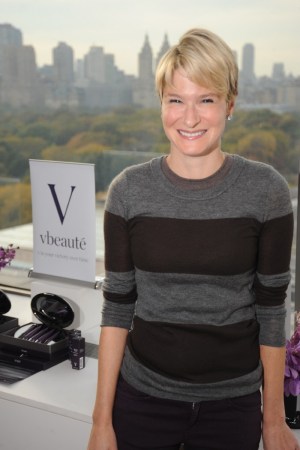 The hallway outside Julie Macklowe’s Upper East Side apartment on Thursday afternoon was littered with shoes: heels of varying heights, sizes and design mingled with flat leather pumps in vibrant colors, a few pairs of men’s loafers, an errant pair of motorcycle boots, an improbable pair of tennis shoes. “Please remove shoes! Thanks! VBeauté” read a paper sign perched on the kitchen door. The feet that had been in the shoes in the hall were inside the apartment for Macklowe’s trunk show for her new skin care line, VBeauté.

Inside, Macklowe was ready, brandishing an iPad complete with credit card accepting capability on which she computed her guests’ orders. Co-hosts Stephanie Winston Wolkoff and Eleanor Propp were on hand, taking in the panoramic views of the skyline and selecting crustless truffle-oil laden grilled cheese sandwiches or flutes of Champagne. Macklowe was besieged by friends and supporters.

“Let me tell you, I wear no makeup and only use my own products,” Macklowe said, beaming. “And you know the whole story, this only came about because TSA took away all my cosmetics in France and I needed to get skin stuff, and I break out with everything. So I went to Switzerland and got the best people and made the best, simplest products I could find. Back to basics.”

Macklowe spoke from between Adam McEwan’s “Untitled (Richard),” an obituary for the very-much-living artist Richard Prince in the manner of a blown-up newspaper clipping, and a pair of portraits of Grace Kelly that had their eyes cut out. The portraits were attached to a mirror so that further inspection reflected one’s own eyes in Kelly’s face. The portrait that hung farther along the wall had been burned by the artist to obscure most of Kelly’s features.

“We have an emphasis on antiaging elements,” Macklowe continued, indicating some of the scattered literature from the “It Kit,” a sleek and shiny slate-colored oval that snapped open to reveal a selection of her wares in travel-size containers. The last line of its pamphlet read: “VBeauté is your victory over time.”

Ten percent of the sales went to benefit the Food Allergy Initiative, a nearby assistant proclaimed, as Macklowe’s friends dutifully selected their desired ware, handed over their credit cards and scooped up their shopping bags (complete with tissue paper in VBeauté’s shade of purple) and headed out to put their shoes back on.

“I wish I had known,” one guest nodded to a friend while trying to locate her other Alaïa shoe-boot stiletto. “I don’t have a pedicure. But we’ve got to support our friends, don’t we?”