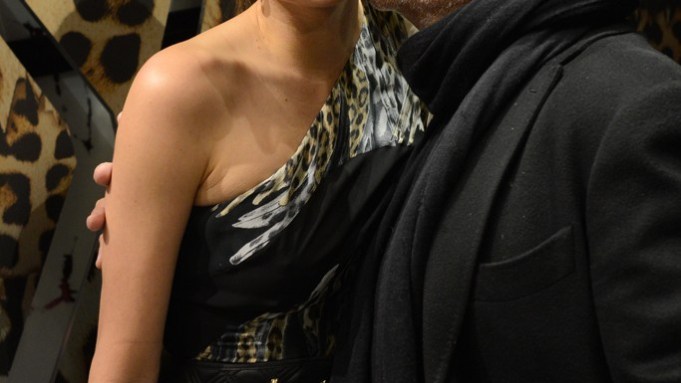 At the opening of the Just Cavalli store in Manhattan Thursday night, Roberto Cavalli was in the middle of an interview when he got distracted by a young blonde. Talking business and stores was suddenly the last thing on his mind.

“She’s buuuutiful,” he said in his roaring, Italian-inflected English. “Sorry. I like a woman, what can I do?” he said, offering one of those trademark Italian shrugs.

The young woman was an up-and-coming Russian model, Vita Sidorkina.

He was sitting down and she was standing up. “Look at her! She’s buuuutiful,” he let out again, this time summoning Sidorkina, who sat beside him on a chaise in a signature ka-pow Cavalli print.

Cavalli wore his signature tinted aviator glasses, a scarf, and a splendid suntan, the very picture of la dolce vita, surrounded by women in a space that looked as shiny as the inside of a disco ball. The store is the secondary line’s first in New York nearly two years after licensee Ittierre closed down its Fifth Avenue flagship.

Cavalli, in town just for the occasion, had just returned from the Art Basel fair in Miami, another town that appeals to his sensibilities.

“Hahaha. It’s very special for me,” he said, referring to Miami. Cavalli’s laugh is like his aesthetic — outsize, exuberant, fortissimo! “I tell you why. I love art. I love the people who go to Art Basel. But honestly, don’t forget that I was born in Florence. Florence is the capital of the art of the world. When you speak about art, you speak about Michelangelo, Giotto. The modern art just feels…” Here he trailed off and said something unintelligible in his colorful English but that suggested he wasn’t all that impressed with anything other than the masters.

Sidorkina was next to Cavalli when Marjorie Gubelmann, the socialite and aspiring DJ who was behind the turntables at the store, played Sister Sledge’s “He’s the Greatest Dancer.”

“I like the eyes,” Cavalli continued, gushing about Sidorkina. “I like the sweet smile. That’s the first thing I notice in a person because that is the character.”

He admired Sidorkina some more.

“You know why? Because I love the femininity and she’s really feminine. OK!” he said definitively. “Now you know what I like about women.”

Cavalli’s eye for beautiful women has a good track record. In 2005, he said he came across a young woman, an unknown Kerr, and made her a star. Kerr, who was huddling nearby with a handler, has in fact become so famous that getting her to say a few words about Cavalli was harder than getting security clearance to the White House. “I remember he believed in me,” she allowed finally of the designer.

“I discovered Miranda in Milano. I remember she was a little girl,” Cavalli said. “Oh my god. I fall in love, I fall in love. I insisted to my staff that they take her for the Just Cavalli line and the staff said, ‘Oh no, nobody knows her.’ I said, ‘What do you care? She is buuuutiful!” A big grin came across his face, a look of vindication.

“Now, afterward, she got famous, I say to my people from casting, ‘Look, I can see more far than you.’ Hahaha.”