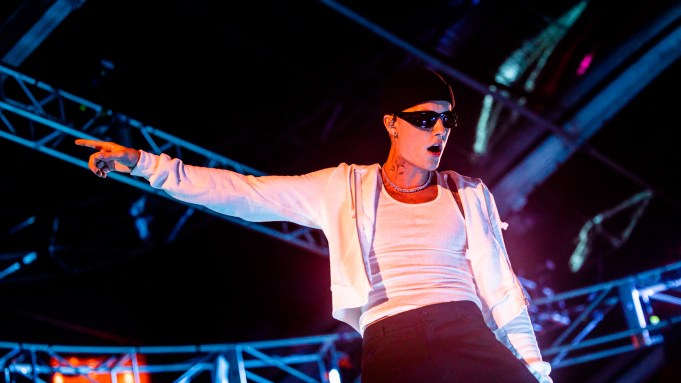 “Are you rooting for The Rams or what?” asked Justin Bieber on Friday night ahead of Super Bowl Sunday, when the Los Angeles Rams take on the Cincinnati Bengals.

It was Day One of The h.wood Group and Revolve’s two-day “Homecoming Weekend” bash to celebrate the occasion. L.A. natives John Terzian and Brian Toll, the entrepreneurs behind the hospitality company (and owners of hot spots The Nice Guy and Delilah) brought sports and entertainment together with fashion, partnering with Revolve, the L.A.-based Millennial and Gen Z-focused e-tailer.

This marks the first time the two — known for creating massive productions in nightlife for the likes of Art Basel and Coachella — hosted an event of this scale since the pandemic began.

A marching band welcomed the 1,500 guests at the entrance, which was full of sponsored, curated activations. The affair, produced by Uncommon Entertainment, was presented by Places.co, an NFT-based, members-only travel club, Flow.com, a Web3 platform, and entertainment agency Confirmed 360.

Inside, held under a massive tent at The Pacific Design Center in West Hollywood, DJ Marshmello entertained the crowd before Bieber took over, singing radio hits like “Intentions” and “Peaches.” Stomping around the stage, he wore sunglasses and a beanie, with a glittering diamond necklace, white tank, snug zip-up hoodie and oversize trousers.

For the VIPs, the party continued at The Nice Guy, where Bieber, with wife and model Hailey Bieber, Tobey Maguire, Leonardo DiCaprio, Euphoria’s Angus Cloud, Drake — and entourage — partied until the early morning. As widely reported, at around 2:45 a.m. a shooting occurred outside the establishment on North La Cienega Boulevard that involved rappers Gunna, Lil Baby and Kodak Black, who was among four people shot during the incident. The victims are listed in stable condition.

The next day, on Day Two at the Pacific Design Center, Drake was the one to take the stage. He didn’t arrive until 1 a.m., with the crowd standing and waiting for two-and-a-half hours. The guest list included Bieber, Megan Thee Stallion, Eric André, Teyana Taylor, Olivia Culpo, Leon Bridges and Jon Hamm.