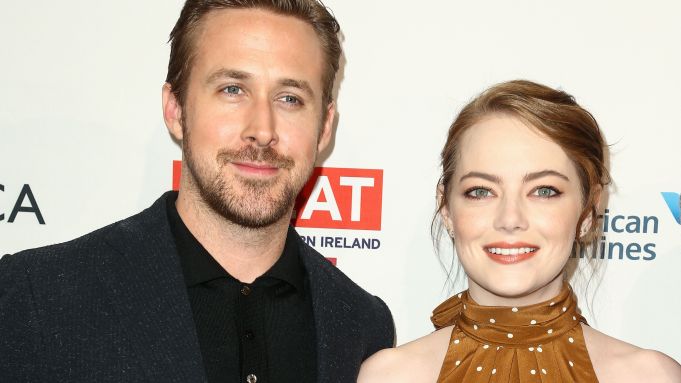 “I thought I was coming to a tea party,” Joel Edgerton sighed. The “Loving” star joined fellow Golden Globe nominees including Michelle Williams, Justin Timberlake, Emma Stone and Ryan Gosling on the red carpet at BAFTA’s annual Tea Party on Saturday afternoon. As the actor inched his way toward the Four Seasons Beverly Hills ballroom, he quickly learned that free tea came at a price.

“It’s been like an hour on a red carpet when really what I thought I was going to do was sit down and have a cup of tea with some people.” The actor said he’s been shooting “Bright,” a sci-fi film with Will Smith, between awards hoopla. “I’m exhausted, but I’m happy that I’m working because otherwise I would lose my mind.”

“Moonlight” actress Naomie Harris made the weekend a family affair. “I’m so thrilled to share this with my mom,” she said. “She’s flown in from London and she’s so excited to meet all these amazing actors and filmmakers. This is going to make her entire year.” The actress wore a custom made dress by Thom Browne for the party, but was mum on details about Sunday’s gown — only offering that it’s “metallic.”

“No hints,” echoed “Outlander” actress Caitriona Balfe. “You’ve got to have some room for surprises. I love it. That’s all that matters to me.”

As for how he’s been preparing for the big day, he said, “I’m just trying to be rested and make sure I’m hydrated. I’m keeping it calm and low-key. My wife will be with me. She’s pregnant, so I’m going to be conscious of how she’s feeling.”

Nominee Aaron Taylor-Johnson attended with his director wife Sam. “It’s fun to come to these glitzy events,” she said. “For Aaron, it’s less fun. He gets really anxious, but I quite like the excuse to put on high heels.” She insisted their daily routine is far less glamorous. “This morning, Aaron was cleaning up dog poo and vomit at 4 a.m. and tomorrow morning will probably be the same. We normally have a mountain of kids pile upon us at 6:30 a.m. Doesn’t matter if there’s an award ceremony and you’ve got to look good.”

Inside the party, a sign read “selfie-free zone,” allowing celebrities to feel at ease over traditional cucumber sandwiches, smoked salmon, beef samosas — and tea, of course. Edgerton finally got his cup, then chatted with Williams. New couple Sophie Turner and Joe Jonas held hands while wandering around the party. Elsewhere, Harris found a friend in fellow Brit Thandie Newton; Timberlake chatted with Amy Adams, and Gosling and Stone strategically carved out a corner by the party’s exit.

Tom Hiddleston was one of the last to leave as he graciously shook hands with well-wishers with every step he took. Meanwhile, fellow Brit Riz Ahmed reflected on the difference between Londoners and Americans — concluding that it usually comes down to how fans react to seeing him in person. “Americans are a little different with it,” said “The Night Of” nominee. “They shout at you from across the street. In London, maybe, they’re a bit more shy.”