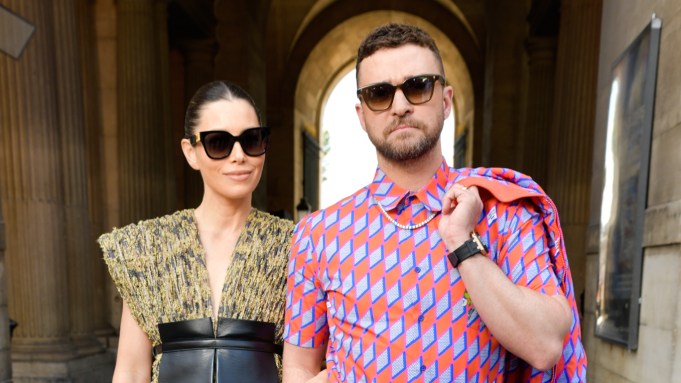 To say the Louis Vuitton show was the hottest show of the season might be a little premature when it’s just day three of Paris Men’s Week, but with the start time temp topping 85 degrees and seats in direct sun, everyone was feeling the heat.

“This breeze coming through is very welcomed, and I’m glad I have short sleeves,” said Justin Timberlake, who arrived with wife Jessica Biel.

Timberlake was on hand to pay tribute to longtime friend Virgil Abloh, the artistic director of Louis Vuitton who passed away last November.

“You know Virgil has had such an impact and will continue to have such an impact moving forward, to be here to help pay tribute is an honor,” he told WWD.

The couple exchanged greetings and stories about their toddlers with LVMH Moët Hennessy Louis Vuitton chief executive officer Bernard Arnault and his son Antoine Arnault, the group’s director of environment and image.

“I’m cooking,” said Joel Edgerton, who was about to shed his denim jacket. “I’m just a plus one when I’m here. I feel like a fish out of water,” the actor said, taking in the outsized set in the center courtyard of the Louvre museum.

Despite being married to Christine Centenera, fashion director of Vogue Australia, he said he’s more of a jeans and T-shirt guy in his downtime. “I’ll wear a tux if I have to. Most of the time, I wear what people tell me to wear. That makes it easier,” he said jokingly.

Against the grand background of the historical museum juxtaposed against the futuristic yellow runway, the actor reflected on Abloh’s legacy. “He was always having fresh and new ideas to bring all the time,” he said. “I love the evolution as well, and that it can travel through time. It’s a very old brand and the way the monogram travels is fascinating.”

The show started off with the marching band from Florida A&M University performing a lively routine. As the models took the stage, Kendrick Lamar, wearing a crystal crown of thorns, performed live from his seat.

Luka Sabbat was seen lip synching along. “I have the Kendrick album and the clothes were sick,” Sabbat said, before making a break for it. “I’m really sorry, but I’m so hot right now.”

After the show, Naomi Campbell declared it “beautiful.” “I was honored to be seated next to Kendrick Lamar,” she said as she made a beeline to share a hug with Twitter founder Jack Dorsey. The two made dinner plans for after the show.

J Balvin exchanged greetings with Edgar Ramirez. “It was really, really, really amazing and also really nostalgic,” Balvin said. “You know, this was a really tough one. Rest in peace, Virgil.”