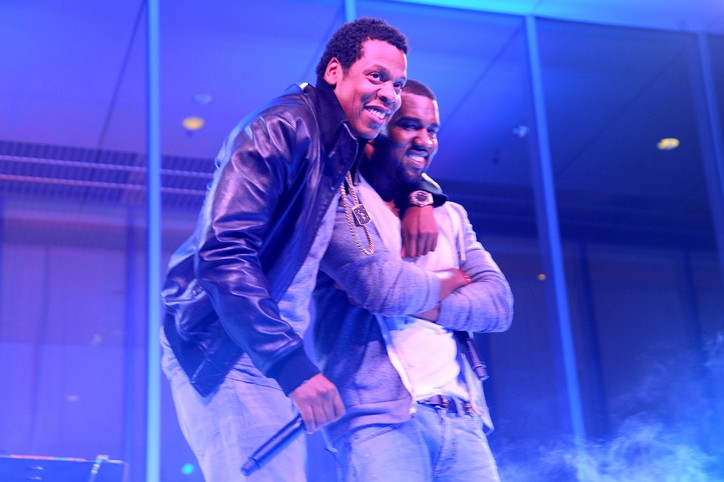 One of the bigger sing-alongs of Kanye West’s performance at the Museum of Modern Art on Tuesday night came about 20 minutes into his hour-plus set. Dressed in light blue jeans, a gray hoodie and black skytops, West bent into the mic to sing the first four notes of his 2007 single, “Can’t Tell Me Nothing.”

Putting aside the song’s general catchiness, it made a certain sense that the crowd — made up predominantly of young professionals — would shout along. At that point in the evening, the dinner portion of MoMA’s annual Party in the Garden had given way to its more youthful, and less cost-prohibitive, after party. The power brokers in training and Masters of the Universe of tomorrow there for Kanye were, in fact, in the process of getting their money right.

Or at least less far along in the process than the museum’s more established patrons and friends who had filled the Abby Aldrich Rockefeller Sculpture Garden for cocktails. Among those who turned out for the party, sponsored this year by Cartier, were Henry Kravis and Marie-Josée Kravis, Larry Gagosian, Michael Douglas, Jerry Speyer and David Rockefeller. James Frey, standing near one of the garden’s pools, explained that a non-disclosure agreement would keep him from discussing his upcoming interview with Oprah. He talked art instead.

“At MoMA, my favorite [work] to see is the Pollocks,” the author said. “The ferocity of it and the recklessness of it, and the abandon of it and the beauty of it. I wish I could do with words what he did with paint.”

Would he be sticking around for Kanye?

A few of Frey’s fellow attendees, including Leelee Sobieski and Richard Phillips, echoed the endorsement of West. As cocktail hour ended, and the garden began to clear, Mayor Michael Bloomberg was chatting among a circle of guests that included Jamie Dimon. On his way into dinner, the mayor talked up the museum.

“This is one of the great jewels in the cultural crown of New York,” he said, surveying his surroundings.
So would he be sticking around for Mr. West?

To be fair, the use of an honorarium in reference to West might have been the cause for the confusion.

“Yeah, sure,” the mayor said with a laugh. “Well, I was invited. We’ll see. I’m not sure actually whether I will. I’m really just going to stay through dinner and then that’ll be it.”

As guests dined on filet mignon and English pea pancakes, the garden began to fill again. Several reports had the line for entry stretching down 54th Street and onto Fifth Avenue. By the time West took the stage, at a little after 11 p.m., 1,500 additional guests had arrived. Backed by a three-piece band dressed in all white, the rapper ripped through a dozen hits, only rarely pausing to acknowledge the audience or his surroundings with an occasional “How y’all feeling tonight?” or “New York City!”

Not that he needed to. Judging by the volume of cameraphones and rocks glasses raised above the scrum, the audience, which by that point included Aziz Ansari, Chloe Sevigny and Scott Campbell, was clearly on his side. And that was before Jay-Z dropped in to help close out the set.

“I know everybody in here is cool and all, but when this drops we need everyone here to go H.A.M.,” Jay-Z proclaimed.

Though he didn’t explain it to the more genteel MoMA patrons still in attendance, the acronym, the title of a single the pair recently released, stands for “hard as a noun that’s not exactly printable in WWD.”