Kanye West was the special performer at Friday's Bazaar Icons party, which drew a mix of models, actresses and fashion folk - but on the heels of the Yeezy season 4 debacle, is the fashion crowd tiring of Kanye? 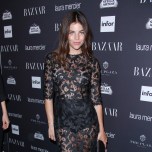 It was only the second official day of New York Fashion Week, and already the collections season had been highly saturated with doses of Kardashian/Jenner. On Wednesday, before the show calendar had even begun, the family was out in force at Kanye West’s Yeezy Season 4 showing, a spectacle most are by now well familiar with. Later that evening, Kendall and Kylie Jenner did a quick change for a pop-up of their Kendall + Kylie collection, which featured a drop-in by Kim. And on Friday, there they were for the the third annual Icons party thrown by Harper’s Bazaar and Carine Roitfeld, timed to Kim and Kanye’s appearance on the magazine’s September cover.

The Plaza hotel was a mob of the glitzy and glamorous, dressed in black tie after a summer of sundresses. “It’s like a back-to-school prom,” a waifish young woman said with delight, darting over to join her model friends. And as expected, the model quotient was high: Ashley Graham, Kate Upton, Lucky Blue Smith and Natasha Poly all mingled inside, along with the likes of film folk, designers and plus-ones. There was Baz Luhrmann, surveying the scene; there was Pamela Anderson and her son, Dylan Jagger Lee, out for your standard mother-son evening; there was Emily Ratajkowski, in next-to-nothing; there was Russell Westbrook in tattered jodhpurs and a T-shirt, and there, too, was Jeremy Scott in candy-colored leather.

Kanye took the stage after 11 p.m., pulling the crowd into the main ballroom. With the first beat drop, iPhones were up and Instagram stories were firing off. But the awe faction weaned quickly — Adriana Lima was seen making a beeline exit, conversations picked back up, and the audience slowly spilled back out into the lobby space.

“I didn’t see it,” Doutzen Kroes said after West’s performance. “I went to see Gigi at Tommy, which was great, and then I changed in the hotel room, had something to eat and came here.” Her fashion week schedule revolves around charity work this time, rather than shows. “I came here for the #knotonmyplanet campaign, for the elephants, so I came just to launch that and then I leave on Sunday — so supershort. But I got to see Jason Wu this morning, which was really beautiful.”

Not far from her, Wu was busy dancing about. “I’m celebrating fashion week,” he said. “I’m not really quite done — I’ve got another show. But I feel very, very good, and I’m happy to be able to at least let my hair down for at least one night.” With that, he shimmied off into a pack of minidress-clad models.

Long after West left the stage, the party carried on — was he even the main draw for the fashion crowd, many of whom appeared tired of the artist, having been subjected to his multihour Yeezy Season 4 ordeal on Wednesday?

As West tends to do, his time onstage was not without a rant.

“People trying to listen to all the reports and s–t and I tried my best to stop trying,” he lamented after performing “Pablo” songs like “Famous,” as well as older hits like “All of the Lights.” “But I couldn’t do it! I couldn’t stop! No matter what they write I just couldn’t stop! I appreciate y’all going on this journey for me. I appreciate all the years that I put up with me learning in front of you. And listening to the music at the same time. I appreciate the moment when Carine put her friend on the cover — no, not this cover, I’m talking about when she put Tom Ford on the cover and all you motherf–kers were like ‘aww Carine no nah’ — she a motherf–king icon, though. There’s only one Carine.” And with that, he dropped the mic and took his exit.