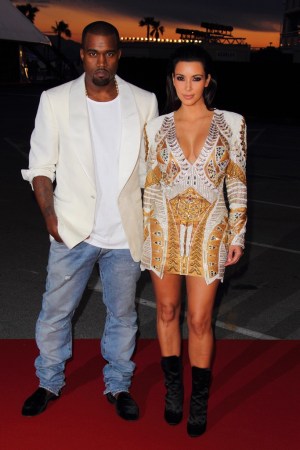 A smitten-looking Kanye West pulled out all the stops for a movie date with Kim Kardashian. On Wednesday night, the reality star accompanied her beau to the premiere of his new short art film “Cruel Summer,” named after his new album and screened in a vast white pyramid structure pitched on a desolate parking lot at Palm Beach, Cannes, surrounded by the sparkling Mediterranean Sea.

Kardashian sashayed down the red carpet on West’s arm wearing a clingy white and gold dress by Balmain. On their heels came an impressive pack of West’s hip-hop pals — some in Givenchy man skirts — including Jay-Z, Big Sean, D’Banj, Theophilus London and Scott Ramon Seguro Mescudi (aka Kid Cudi), who is the star of the film.

Teyana Taylor, who also stars in the work, which was filmed in Qatar and is inspired by the Romeo & Juliet-esque classic Middle Eastern tale “Antar and Abla,” said, “It was so hot, and we had to be wrapped up, I actually had a whole-body suit, plus a sword, plus a cape.” The singer later performed at the event’s after party.

Before dinner, guests were treated to a fashion show by the site’s infinity pool, featuring looks by Juozas Statkevicius, with de Grisogono baubles.

“I just love events in Europe. They’re kind of all disorganized,” laughed Klum, pinned up against a wall in the crush as people made their way to their tables. “I love to see what people are wearing here, the women are so much more colorful,” continued the model mogul, who wore Roberto Cavalli accessorized with cabochon emerald and amethyst earrings and a bejeweled butterfly cuff by de Grisogono. “And I love that there is no air-conditioning. You know, when it’s summer but it’s freezing inside. I just hate that.”