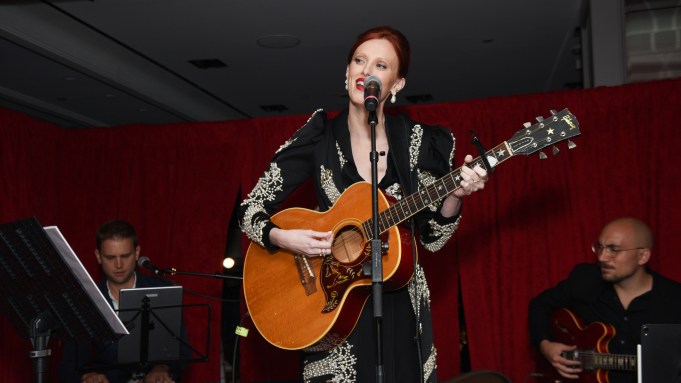 There has been an influx of disco-themed looks floating around Midtown these last few days, and fashion week isn’t the culprit. That credit goes to Harry Styles, who’s in New York on the heels of his newsworthy Venice Film Festival appearance.

The singer and “Don’t Worry Darling” star has been busy playing to full stadiums of fans at Madison Square Garden, but his presence can still be felt at fashion week. Up at Bergdorf Goodman on Thursday night, Karen Elson was channeling Styles to a similarly packed (albeit much smaller) room.

“This next song is a Harry Styles song,” said the singer, performing as part of the retailer’s “Bergdorf Good Night” party. “I know how we all feel about Harry: we’re all in love with him, right?”

The crowd, nestled around the second floor men’s store rotunda, gamely agreed. As Elson set into her acoustic rendition of “Sign of the Time,” one guest began waving his lighter — but alas, his effort didn’t catch on with the crowd, which included Adam Lippes, Christopher John Rogers, Michelle Ochs and “Euphoria” costume designer Heidi Bivens. “SNL” star Chloe Fineman was catching up with “Industry” actress Marisa Abela at a café table with Evan Mock, who chatted with designer Wes Gordon as he passed by.

After covering Robyn’s “Dancing on My Own,” Elson commanded the room for her final song of the evening, a tribute to the late Queen Elizabeth II.

“I’m a British lady, and obviously today is a big day for the people of Great Britain. Our queen has passed away,” Elson said. “Regardless of what people think about the monarchy and the queen and what-not, I got to say, there’s something about this woman, Queen Elizabeth, who really represented something: keep calm, carry on, never complain, don’t explain.

“Her passing today really deeply impacts every single part of my childhood and my upbringing. For my grandparents, she was the person who through World War II lifted people up,” added Elson, explaining that her last song would be “We’ll Meet Again,” by celebrated British singer Dame Vera Lynn. “The queen did a speech during COVID-19 where she said ‘we’ll meet again’; she referenced this [song]. I felt like the perfect ending for this evening is to sing ‘We’ll Meet Again’ because here we are again, gathering in New York, finally meeting with each other.”