The director debuted a triptych of commercials he shot for Magnum ice cream starring the actress. 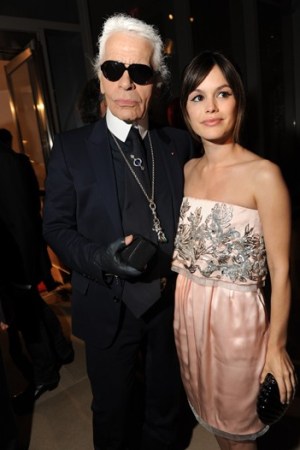 It is a truth universally acknowledged that Karl Lagerfeld draws a crowd. Thursday night proved no exception, with well-wishers from all walks of life (art, music, fashion, ice cream) turning out to the IAC Building in Chelsea to celebrate the Kaiser’s collaboration with Magnum, a much-beloved European ice cream brand making it’s U.S. debut.

Behati Prinsloo, Olivier Theyskens, Leigh Lezark, Ann Dexter-Jones, Zanie Gugelmann, Patrick Demarchelier and Lisa Airan were all on hand to either greet or sneak peeks at the designer and sample the chocolate-inspired cocktails. Lagerfeld debuted his three commercial/”short films” for Magnum at the party, as guests lounged on modular furniture scattered throughout the space. Consistently surrounded by a small army of attractive male models, suited guards and PR henchmen, the designer’s arrival caused ripples of commotion in the lobby before he traipsed into the fete’s VIP section: a raised rounded platform surrounded by a velvet rope.

Rachel Bilson was right on Lagerfeld’s heels. The actress appears in all three of the Magnum spots (playing an art student, ballerina and model, respectively) along with longtime Lagerfeld favorite Baptiste Giabiconi.

“I was just so excited,” Bilson said with a grin. “I mean, I got to work with Karl Lagerfeld!? I would have done anything. And eating ice cream isn’t too bad!”

The admiration seemed to be mutual.

“Rachel is a very good actress,” Lagerfeld explained. “She has great ability…with her face.” One partygoer jokingly prodded the designer about how ice cream fits into his famously strict diet. “It’s not just about the ice cream.” Lagerfeld murmured.

“Karl, you’re a rock star!” another partygoer shouted, eliciting a smirk from the designer. It certainly felt true.