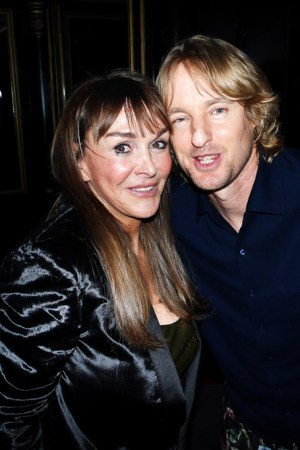 The fashion world loves “Zoolander” and Owen Wilson, the blockbuster’s star, loves it back.

Wilson and his two brothers, Luke and Andrew, turned up at the party cohosted by Karl Lagerfeld and Babeth Djian, editorial director and founder of Numéro magazine, at Paris’ Castel Club on Wednesday night.

The occasion was the release of a tome published by Steidl titled, “La Couture fait son Numéro,” edited by Eric Pfrunder, image director of Chanel. It contains a selection of couture series shot by Lagerfeld for the magazine over the last 15 years.

“I just saw [Karl Lagerfeld]. It was exciting to see him,” said Wilson, who was in the City of Light to present the movie sequel, “Zoolander 2,” opening Feb. 12. “I love being in Paris,” he told WWD, noting it was his first time at city’s mythic club.

“It is hard not to be a [‘Zoolander’] fan,” said Peter Marino. “I have only seen the first one; the reality of fashion is way more absurd,” the American architect joked. “I saw a [trailer for ‘Zoolander 2’], where [the actor] is lying on the saddle of a horse and a girl is spanking him. I thought it was pretty hilarious.”

“We made a promise with David [Koma] to go see the movie altogether [with the Mugler team] when it comes out,” said Virginie Courtin-Clarins, who hinted at the fall 2016 collection for Mugler with the word “tribal.”

“But it’s still going to be Mugler, so ‘Mugler tribal,'” she added.

Lagerfeld, Waight Keller and Arnault were among those who made their way downstairs for the performance of the up-and-coming band Minuit, which was formed by children of the legendary French pop-rock group Les Rita Mitsouko.

Girardot said she plans to launch a bag collection.

“They are tote bags in leather. I started designing them for myself and my friends keep asking me [for them],” she said.

French actor and director Michaël Cohen said he just wrapped up a commercial for Lancôme starring Alma Jodorowsky and that he’s working on his new film “L’Invitation,” in which he costars with Nicolas Bedos.

“It’s a buddy movie,” said Cohen. “Not really like ‘Zoolander,’ but more in line with [the films of] Judd Apatow.”

“We are celebrating 15 years of complicity,” said Djian. “Like in his shows, Karl dazzles,” she added, flipping through the pages of “La Couture fait son Numéro.”

In one photo he shot for a Numéro couture issue in 2004, Lily Cole wears Dior couture in a circus. In another from June 2003, it’s Linda Evangelista backstage at a couture show. Meanwhile, the last images, from March 2015, feature model Anna Ewers wearing Chanel couture for a series called “La couture en fleurs” (or “Couture in bloom”).

The book is being showcased in the windows of Paris’ bookstore Galignani before rolling out to other select bookshops.