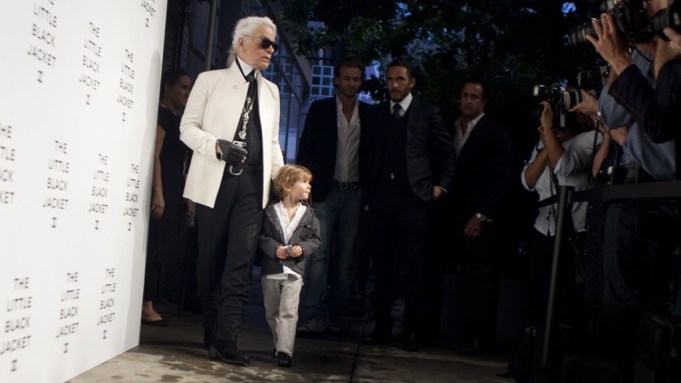 On Wednesday night in New York’s SoHo neighborhood, at the opening party for an exhibit based on Steidl’s forthcoming “The Little Black Jacket: Chanel’s Classic Revisited,” Joan Smalls was explaining how she came to be photographed for the book wearing its eponymous article reinterpreted as a headpiece, skimpy top and skirt all at once.

“It was their decision,” she said, referring to the book’s authors Karl Lagerfeld and Carine Roitfeld. “I think they already had an idea of how they wanted me. I guess being from Puerto Rico, being a little more sassy, tropical, cha-cha…just my personality, it was fun. I totally love whatever they do.”

The pop-up event space, which will exhibit the book’s 113 portraits of notables displaying the jacket’s versatility from today through June 15, was filled with many people who felt likewise. Lagerfeld and Roitfeld lay claim to two of the fashion industry’s most ardent cults of personality, a fact proven by the breadth of celebrities they corralled for the book and underscored by the New York opening’s turnout.

Lagerfeld was mobbed at almost every turn as he greeted guests including Lynn Wyatt and Alber Elbaz. Smalls, who later pulled out her iPhone to take a snap of her own portrait on the wall, was one of many of the tome’s subjects on hand. Linda Evangelista, Karolina Kurkova, Elisa Sednaoui, China Chow, Poppy Delevingne and Freja Beha Erichsen were among the others in attendance who had posed in the jacket.

“Carine’s one of the most down-to-earth people and Karl’s so easygoing too,” said subject Alexander Wang. “I was in and out of there. It was so pleasant.”

“We just did it; We funked it out,” explained expert leather jacket wearer Theophilus London, who was coaxed into the tweed Chanel creation for the book and who wore it again to perform at a post-opening dinner at Balthazar.

Roitfeld, who was wearing an interpretation of the jacket she had actually constructed from a skirt, was a bit more helpful when she took a break from the action at the party.

“You know Karl, you have to surprise him,” she said of her approach to styling the portraits, which Lagerfeld then shot. “I was very surprised to see Karl with the little kids because you don’t imagine Karl with a little girl or little boy and he was so good….He’s very nice and soft with the kids. You don’t imagine that with Karl.”

Sure enough, Hudson Kroenig, son of male model and Lagerfeld favorite Brad Kroenig, and one of the book’s younger subjects was still on hand later when London took the stage at Balthazar. The four-year-old showed off his moves as he sat on the shoulders of Lagerfeld’s bodyguard Sébastien Jondeau. The next generation of Karl and Carine devotees looked secure.