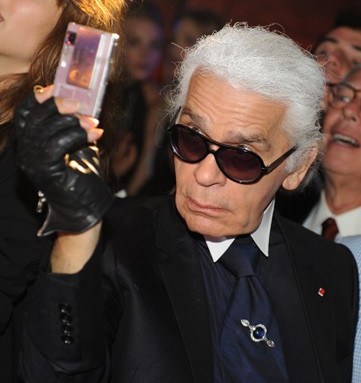 Karl Lagerfeld is often referred to affectionately by the fashion industry as Kaiser, a German emperor. But he’s taken one hell of a hold on New York.

On Thursday night, looky-loos from every walk of life packed in five deep along Wooster Street in SoHo for a glimpse of the designer entering the newly renovated Chanel store, site of a huge bash for its reopening. “There are very few things in the world that make people in New York City excited. We’ve all seen and done too much,” Sarah Jessica Parker observed, safely ensconced in the shop. “It’s nice that this extraordinary and wonderfully foreign man can come here and create such excitement.”

Even Lagerfeld admitted the crowd, klieg lights and remarkable celebrity attendance were exceptional. “For a shop opening it’s quite a lot, eh? Shop openings used to be more discreet affairs in the past. Now it’s like the Met party.”

Lady Amanda Harlech explained the strong turnout thusly: “He’s almost like a cipher of a man in that he’s distilled down to dark glasses, silver hair, the inverted triangle of his body with the legs and the boots and the belt. It is like you have to see it to believe it, so why not come along?”

Lagerfeld’s gravitational pull likely provoked The Couture Council at the Museum of the Fashion Institute of Technology to honor him with the Fashion Visionary award at a luncheon held in Avery Fisher Hall the following afternoon (sponsored by Quintessentially). Many partygoers from the previous evening were there — Kruger, Daphne Guinness, Harlech — as well as a few fresh faces like Martha Stewart and Simon Doonan, who read excerpts from a 2001 New York Times article by Amy Spindler in which she enumerated several of Lagerfeld’s aphorisms: On being knocked off, “Flattery isn’t the right word, but it proves I am right.”

Longtime friend Valentino got a few words in via a letter that was read aloud. “Do you remember, Karl, when the two of us were in our teens, sitting at the Café de Flore,” he wrote, “dreaming that one day we could become big names?”

The night before Lagerfeld admitted that he’s become so big that he “cannot cross the street [alone] anymore.” But the idea of being honored for his success makes him uncomfortable. “I don’t like the word ‘honored,’” he said. “I did a job all my life and I’m happy they like it.”