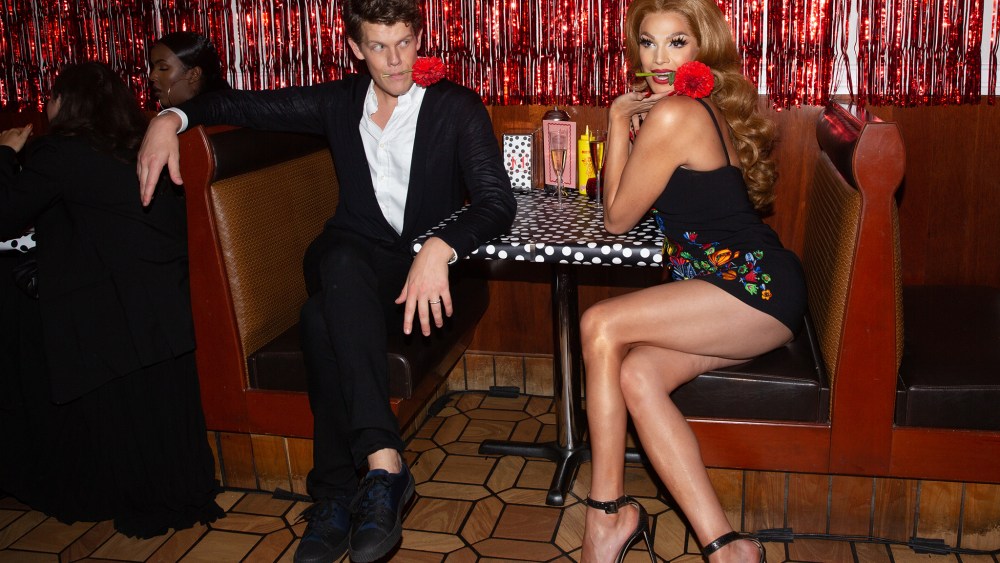 “Be so careful with that, Wes!” Karlie Kloss called to Carolina Herrera designer Wes Gordon on Monday night.

Gordon wielded a pair of enormous scissors, which he’d just used to cut a red ribbon outside the Carolina Herrera flagship on Madison Avenue, marking its official reopening. Now, he and Herrera herself were taking photos and the blade in question was in all too precarious a position for Kloss. “We should put the scissors down,” she said, laughing.

A crowd of Herrera supporters including Alexandra Daddario, Linda Cardellini, Valentina and Romee Strijd hung out at the store drinking Champagne before heading a couple doors down to Three Guys Restaurant. The Upper East Side club sandwich institution is reportedly Carolina and Reinaldo Herrera’s favorite restaurant, and Gordon worked with event planner Fiona Leahy to transform it into the venue for that night’s party, Carolina’s Diner. The walls were covered with red shiny tassels, and servers wearing paper hats distributed spicy margaritas out of Bunn coffee decanters.

Gordon was able to take a deep breath and relax after his big day — showing the collection that morning, then celebrating the reopening of the store. He said Herrera’s attendance at the presentation — she goes each season — does add an extra layer of pressure, but acts as more of a positive kick in his pants to really bring the goods.

“She’s definitely the opinion I care the most about in the audience, and she was the first person backstage today,” he explained. “She gave me a big hug.”

Cardellini came to the party with her husband Steven Rodriguez; they sat at the bar and ordered tiny silver dollar pancakes. She said she’s an admirer of the brand, and is using this New York Fashion Week as an opportunity to chill before she returns to the throes of work.

“I’m working on ‘Dead to Me,’ we’re doing the second season,” she said. “We start shooting in two weeks. This is my last outing before I get totally encapsulated in that world; I go right into fittings and rehearsals. [Rodriguez and I will] go to another show and we’re going to maybe see a friend’s movie. We’re enjoying some together time, too.”

The real star of the night was Kloss, who was followed by cameras all evening and wasn’t alone for a single second — friends like Toni Garrn gossiped with her to no end. As she was leaving, Kloss denied an interview, but at least sweetly, saying, “I want to think properly about what I want to say, and all day, I’ve been so scattered and jet lagged. But I’ll be around this week. To be continued.”