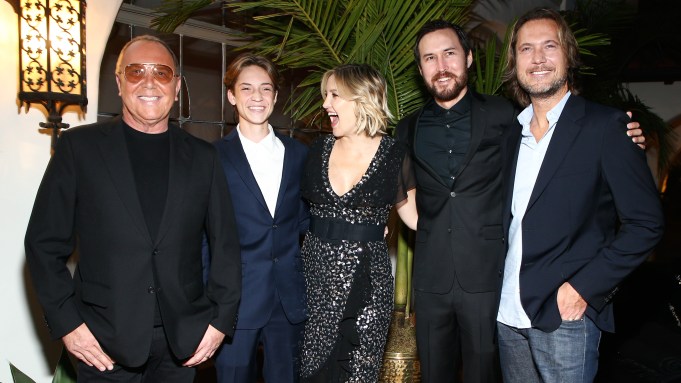 “We couldn’t wait for tonight,” said a beaming Kate Hudson as she entered the party in Beverly Hills on Wednesday night — her first since giving birth to daughter Rani Rose five weeks ago. She wasn’t referring to the clutch of family with her — stepdad Kurt Russell, son Ryder Robinson and partner Danny Fujikawa — but to Michael Kors, her longtime friend and now fellow World Food Programme ambassador.

The two spoke earlier at the University of California, Los Angeles, where Hudson — not surprisingly — gushed that her daughter is “so cute!” While moderating the conversation, NBC journalist Natalie Morales noted, “If she is taking herself away from her daughter just five weeks later to be here today, it tells you how important this cause is to her.”

“— and how much I need a break,” the mother of three added, prompting laughter from the audience.

While Hudson has been working closely with the organization for two years, she was named a Goodwill Ambassador for the United Nations World Food Programme on Nov. 1.

“I connect to it on so many different levels,” Hudson said, “especially when you’re a mom.” She added, “The thing that really struck me about the World Food Programme was that…it’s a simple thing to solve. It’s a fundamental need and it feels very attainable.”

“They’re teaching people how to feed themselves and farm locally,” continued Hudson, who traveled in 2017 with the organization to rural Cambodia to visit elementary schools supported by the organization’s school feeding program. “I wanted to do more. I was supposed to do another [trip]. Obviously, I got pregnant, but I can’t wait to continue to see globally how they’re affecting different areas through the program.”

Kors is also a United Nations World Food Programme Global Ambassador Against Hunger. He became involved with the organization five years ago. The designer enlisted Hudson’s help for his Watch Hunger Stop campaign three years ago, which featured limited-edition watches that benefited the nonprofit.

Kors’ dedication to solving the world hunger crisis began 20 years ago when he partnered with God’s Love We Deliver. His initial mission was to feed sick individuals impacted by the AIDS/HIV crisis. In 2013, he joined forces with the World Food Programme in order to make a greater impact. Since then, Kors has helped provide 17.8 million meals through the program.

Of his dedication to the issue, Kors said, “I’m not a doctor. I’m not a scientist. I’m not a politician, but I looked at it and I thought, ‘You know what? We have people here who need nutritional food and they’re in the middle of New York City, in one of the wealthiest cities in the world.’” He continued, “Hunger is a solvable problem. This is a global issue and this is something that everyone can get involved with.”

To put his money where his mouth is, Kors created a colorful “Watch Hunger Stop” T-shirt to benefit the organization. Kors will donate 100 meals to the organization’s school meals program for each $40 shirt purchased. Kors will donate 100 additional meals if shoppers snap selfies of themselves in the shirt and post it online with the hashtag #watchhungerstop. Hailee Steinfeld is involved with this year’s campaign and can be seen sporting the shirt in the brand’s latest advertisements.

“Fashion can be obviously thought of as very frivolous,” Kors said. “I think sometimes people, with fashion, they can feel a little guilty, like, ‘The world is such a precarious place. It’s on fire. The ground is shaking. What can we do? I feel terrible that I care about great shoes or a great handbag or whatever that might be.’ We wanted to let people know that — you know what? — you can, in this instance, take your love of style, take your love of fashion and give back.”