The actress was on hand to present the Sandra Taub Humanitarian Award to Kay Krill. 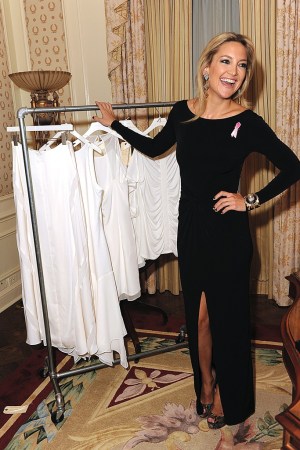 After Hurricane Sandy forced the cancellation of the Breast Cancer Research Foundation’s annual lunch in October, the organization packed even more star power into its annual Hot Pink Party. The event was held Wednesday at the Waldorf-Astoria Hotel in New York.

Kate Hudson, who was on hand to present the Sandra Taub Humanitarian Award to Kay Krill, president and chief executive officer of Ann Inc., sat down in her Waldorf Towers suite to discuss everything from her upcoming capsule collection with Ann Taylor to the dream of someday appearing on Broadway.

“I’ve had a lot of mentors in my life, but I have to say Kay and how she structured her company and her focuses not only on the brand but on philanthropic causes is truly admirable,” said Hudson, who was clad in a long-sleeve black jersey Ann Taylor dress. The piece will be available at Ann Taylor this fall.

On May 20, Hudson’s first capsule collection for the retailer will enter stores. Among the offerings: a long white skirt and a short white dress, which are Hudson’s favorite pieces, and rose-gold necklaces, bracelets and shoes.

Hudson signed on in spring 2012 to be the face of Ann Taylor, and this first capsule collection was designed with Lisa Axelson, Ann Taylor’s creative director. “I love fashion so, for me, there’s nothing difficult about clothes, except executing them,” she said with a laugh. “I could spend hours looking at sketches and feeling materials. But I like how Lisa interpreted my style for this collection. It’s compact and has all the pieces you need for a wardrobe — it’s all clean and white and flowy and flirty with rose-gold accents, and I thought that was so right on, as far as my aesthetic. I’ll definitely go deeper into fashion at some point.”

Beauty? Other than her spokeswoman gig with Almay, nothing’s in the hopper yet — but she doesn’t rule a deeper dive out. “I’m very female, and I’ve been very lucky to have relationships with Ann Taylor and Almay where I really feel the collaborative effort,” she said. “I feel like I’m a part of the brand, rather than just selling something. I believe in their brands as much as they believe in their brands. I like working more creatively on the business side, even more so than as the face, actually.”

While the Internet Movie Database insists she’s working on four films — purportedly “Born to Be King,” “Everly,” “Me and My Shadow” and “Clear History” — Hudson is keeping mum on details. “It’s that confidential thing,” she said with a wave of her hand. “I haven’t been working much in the last two years because of having a baby [son Bingham Hawn Bellamy, now 21 months; she also has son Ryder Russell Robinson, 9] so this year is going to be busy,” she said. “I’m ready to go back to work. A lot of things all of a sudden have popped up that I’m looking forward to doing.”

She noted that she’s continually balancing multiple commitments. “I think it’s something you reassess every day,” she said. “I use my kids as the benchmark, where they’re sitting emotionally, how the schooling’s going. And sometimes you’ve got to look inside yourself and ask yourself if what you’re doing in your life is making you happy. It’s a constant give and take. I’m very lucky to be able to take my kids to work, but the problem is the older they get kids just don’t want to be on the movie set unless you’re making an action movie. Even when things are blowing up — I mean, I grew up on action movies and after awhile you’re like, ‘I’ve seen the plane blow up now, and can I please go play in the park?’ I just think when you’re a kid and your parents are in it, you see another side of it that’s quite tedious.”

But that’s not true for her as an adult — even when that work comes with a generous dollop of paparazzi and tabloid journalism. “I love what I do, and when you love that world — being on a movie set and telling stories — I think all the other stuff becomes noise. I concentrate on the work and the love of the job. It’s a good way to stay grounded,” she said.

Next on her wish list? “One of the things I really want to do is a musical, on stage,” said Hudson. “It’s something I’ve always been looking out for. I like to sing and dance.” And while her voice coach “ambitiously insists I’m a soprano,” Hudson said, she sees herself more in the high alto-low soprano range. “Hopefully, one day, I’d be honored [to be on Broadway.]”

The honoree of the evening was Krill. Upon her arrival at Ann Taylor, she founded its Ann Cares giving platform. “I met Evelyn [Lauder, the late founder of the BCRF] and Myra [Biblowit, president of the BCRF] shortly thereafter.” She said getting involved was “very easy — we are a company of 95 percent women, more than 20,000 women all over the world. One in eight women get breast cancer during their lifetime, so I think it’s very important for me as a female ceo to support this cause.”

Downstairs, the star power continued with Blumarine-clad Elizabeth Hurley, the evening’s emcee, who quipped that her 11-year-old son Damian informed her that “it’s time to get back to work”; Vera Wang, in a heavily beaded dress by Roberto Cavalli, and the evening’s entertainment, Sir Elton John, who has helped raise $51 million for the cause over his 13 consecutive years of performing at the gala. The singer rocked the crowd of about 1,100 with a set of his biggest hits, including “Tiny Dancer,” which he dedicated to the late Evelyn H. Lauder while affirming his ongoing support for the BCRF; “Mona Lisas and Mad Hatters,” “Your Song” and “Rocket Man.” Designers Michael Kors, Donna Karan and Tory Burch were in attendance.