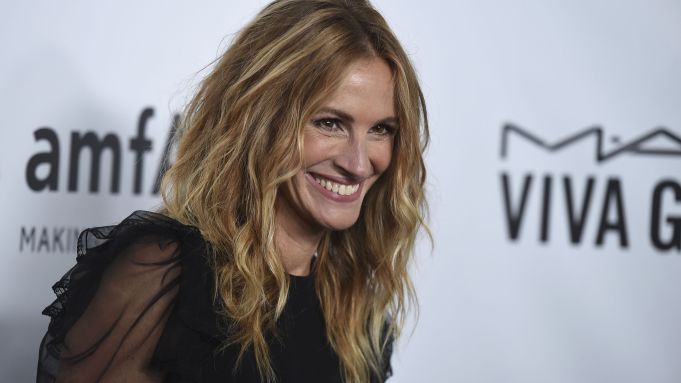 “If it’s alright, I would like to consider this my two-week-early 50th birthday party,” Julia Roberts told the audience at the amfAR Gala on Friday night. Held at philanthropist Ron Burkle’s Green Acres Estate in Beverly Hills, the event honored Roberts for her humanitarian work with the HIV/AIDS prevention organization. “I’m so thrilled to have you all here tonight,” Roberts continued, “and to have my beloved husband here, who is really the man that taught me what it means to give.”

“I’m just an actor and I try to make the right choices in life and in art,” added Roberts. “The truth is I wish I was Frances McDormand, but I’m not. I’m also not Diane Sawyer. I’m not Sheryl Sandberg.”

But she is Julia Roberts, which meant that tablemate Tom Hanks delivered a 15-minute tribute to the Oscar winner while Chris Martin performed a four-song set that kicked off with “Pretty Woman” and ended with a kitschy song he wrote about Roberts. “If you want to book me for bar mitzvahs and stuff,” Martin joked. “I’m cheap as chips. We’re off tour. I’m available.”

The night also featured a live auction with items that included a painting by Mr. Brainwash and a giant pink rabbit by Cracking Art. The biggest ticket item proved to be lunch with Roberts, Ryan Murphy, Matt Bomer, James Corden, Penn, and Hanks which sold for $110,000.

“Never ever sit at Julia Roberts’s table while an auction is going on,” Hanks later joked. “Don’t do it. She tells you to buck up the prize. She tells you to bid on something. Next thing you know, you’re having lunch with strangers.” Hanks teased, “Who actually pledged all that money? You better be so f-cking fascinating at this lunch. We’re not going to entertain you. You are going to entertain us. If we find out you’ve got a bad attitude, guess what?. We’re going to drive through In-n-Out and that’s going to be it. And you’re paying for it.”

Meanwhile, the evening’s emcee James Corden kicked off the affair with a topical joke. “It’s a beautiful night here in L.A.,” he began. “It’s so beautiful Harvey Weinstein has already asked tonight up to his hotel to give him a massage. If you don’t like that joke, you should probably leave now,” he warned.

The topic was equally inescapable earlier on the carpet. “We have an immense systemic issue,” said Sophia Bush. “I don’t know a single woman, whether she works in Hollywood or in the medical field or in politics, who has not in some way, shape, or form been touched or sexually assaulted in their life. It’s a f—ing problem.” But she was quick to point, “Everyone has really banded together in our community. The same thing happened a year ago and we elected the guy.”

“It’s incredibly brave and admirable that the women who’ve come forward aren’t afraid to speak out because that’s the only way that things can change,” added Victoria Justice. “I hope this whole story doesn’t discourage anyone from pursuing [acting] because at the end of the day, although none of us can deny that things like that do happen, there are good people.”

Speaking of, amfAR’s longtime chairman Kenneth Cole attended with social media star Connor Franta as his guest. “I love what he stands for. And I love what he stands in,” said Cole. Added the Kenneth Cole clad YouTube personality, “The whole reason we’re here tonight is to help a good cause. As a proud member of the LGBT community, HIV/AIDS have been a part of our past, but hopefully events like this can cause it to not be a part of our future.”