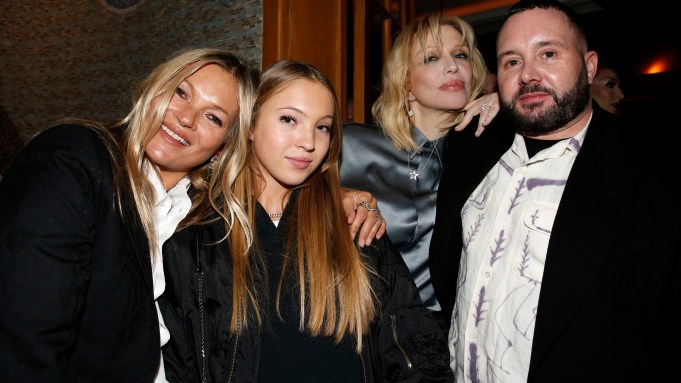 Much of the front row at Dior Men’s fashion show migrated a few blocks Friday evening to Caviar Kaspia, where an after party was in full swing feting the house’s new scent, Dior Homme Eau de Toilette.

Kate Moss swept in with her daughter, Lila Grace Moss Hack, a day after celebrating her birthday. Moss’ first fragrance was Cacharel’s Anaïs Anaïs. “What do I love in a fragrance?” she mused. “I like a bit of romance.”

“I was never a big fragrance girl. I always was an essential oil girl, but once I started working with Dior, it’s hard not to wear their fragrances,” said the ambassador of Dior Beauty. “I love a good perfume.”

So does Christina Ricci, who reminisced about her first. “I was given a gift certificate to an oil shop on Beverly Drive by Carol Kane [a fellow actress in ‘The Addams Family Values’], and I made a rose-freesia oil,” explained Ricci. “So now, my perfume of choice is Do Son by Diptyque, because it’s rose and freesia.”

The actress had flown into Paris specifically to attend Jones’ show. She’d just wrapped a pilot for a TV show with Juliette Lewis. “We’re waiting to hear if it gets picked up for Showtime,” said Ricci.

She also has two movies on the horizon: “10 Things We Should Do Before We Break Up,” in which Ricci plays a single mother, and “Percy,” starring alongside Christopher Walken.

When asked if there are any sorts of roles she wants to try, Ricci revealed: “I’ve not been able to do enough action movies. I’ve always wanted to be a spy.”

Dior jewelry designer Yoon Ahn said she is set to launch a Uniqlo collection next month, and another project, with Nike, is coming out in May.