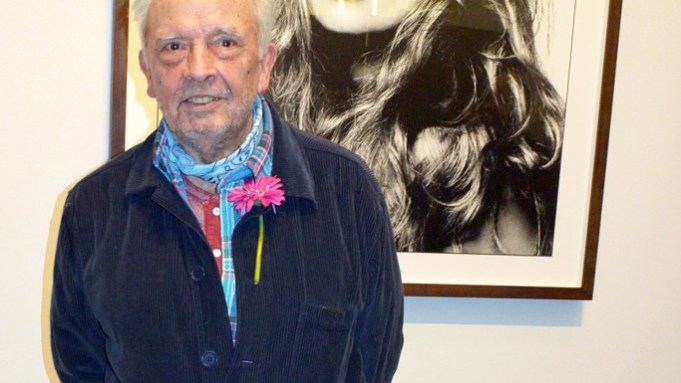 “It’s hard to know where to look,” said actress Gwendoline Christie, casting her eyes over a host of famous faces photographed by David Bailey. “Between all these photos and the incredible people milling about, I can’t concentrate — and I have a sticky hand from spilling my drink.”

Her date, Giles Deacon, was already plotting a return to “Bailey’s Stardust,” the photographer’s retrospective at London’s National Portrait Gallery, which will open to the public on Thursday. “It definitely warrants another visit,” he said during the private view on Monday night. “Probably two.”

Under a giant image of Michael Caine, the photographer and his wife Catherine welcomed old friends and past subjects to the show, which also features a room dedicated to his wife and portraits of his family. “I’m studiously avoiding my mother’s room,” said Bailey’s son Sascha. “There’s a lot of nudity, and I have seen my mother naked enough times, just around the house.” That particular room stands as an ode to Bailey’s wife of 30 years, and features portraits of his children — Paloma, Fenton and Sascha — as well as one of the photographer and his Jack Russell, Pig.

Bailey himself selected the 250 images for the Hugo Boss-sponsored exhibition, which spans five decades of his career, and is one of the gallery’s largest-scale photographic shows to date. It runs through June 1, and the horizons are broad, to

say the least: Alongside the celebrities, pop stars and models, there are documentary images of Ethiopian refugees in Sudan from 1984, and photos of indigenous people in Papua, New Guinea, and Australia.

“I need a top-up,” said Hudson, whose track with Miley Cyrus and the rapper Future is out this week. “I’ve only had three drinks, but that’s an uneven number, and it doesn’t sit well with me.” Did Cyrus manage to get her twerking hips on him? “No,” he said. “I didn’t give her the chance.”