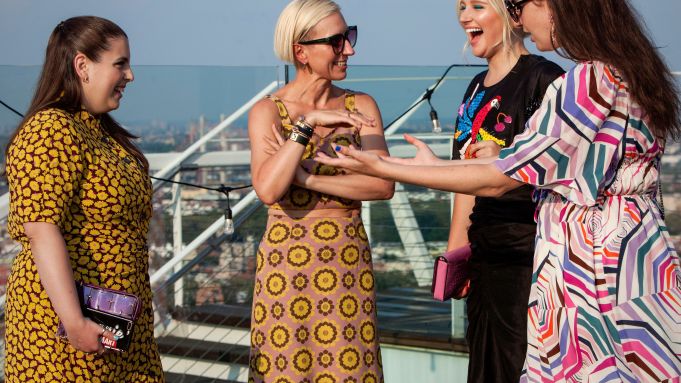 Zosia Mamet was surveying the scene at Kate Spade’s rooftop dinner party on Wednesday night at the William Vale Hotel in Brooklyn. Substitute tea for popsicle cocktails and she’d nailed the vibe head-on: there were cheerful lawn flamingos turned into a ring-toss lawn game, mini pineapples strewn about, and lawn-chair seating around a long table decked in bright shades of Kate Spade pink and green.

The intimate soiree, hosted by creative director Nicola Glass held in collaboration with Manrepeller’s Leandra Medine, didn’t have a particular occasion, per se, other than the fact that it was midsummer and the sunset views from the roof were impressive even to the most jaded partygoers. Why not celebrate Kate Spade’s summertime range in the brand’s natural habitat?

Like Mamet, who has worked with the brand for many years, including its #Missadventure video series, the party was populated with other Kate Spade aficionados old and new. “I honestly really got to re-know them through Zosia because I saw [her] cute little videos,” said Cash, who (like most in attendance) was decked out in Kate Spade.

The actress, unable to discuss her upcoming project, did offer a vague clue: “I’m doing lots of intense new things with my body,” she said. “I’m exploring a new genre. And they’ve shaved half of my head, which I’m secretly hiding under here,” she added, flipping up half of her hair to unveil her undercut. “It reminds me of when I was a teen; I shaved my head twice when I was a teenager, so I feel like I’m growing back. You can feel little pokies growing through the top.”

“Booksmart” actress Beanie Feldstein, who attended the CFDA Awards with the brand in June, also ruminated on her high school days during the dinner.

“I remember the first time I went to the mall alone with my friends, the first store I went to alone was Kate Spade,” she said. “I was just obsessed with everything since I was a young tween. And before I had anyone to help me get dressed or anything I was getting myself into Kate Spade — I wore Kate Spade to the Tony Awards when I was there with ‘Hello Dolly,’ I wore Kate Spade to the Toronto Film Festival for ‘Ladybird.’ So it holds such a special place in my heart.”

After finishing up a whirlwind tour for the Olivia Wilde-directed “Booksmart,” the actress has been enjoying some downtime with her girlfriend, friends and family. “I was just in the Berkshires. which is my favorite place in the world, over the Fourth of July. And I went to James Taylor at Tanglewood, which was magical,” she added. “And just gearing up to do some stuff in the fall, but it’s been nice to have a moment of quiet.”