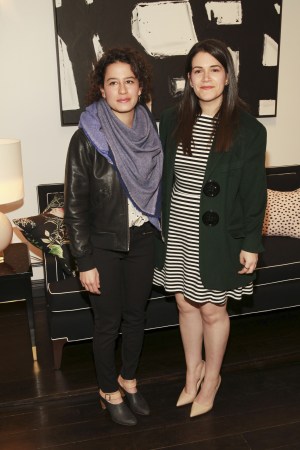 “I want four more of those,” Ilana Glazer said as a waiter breezed by with a platter of tuna tartar-topped crackers. Housewarming party lesson number one: always have plenty of food.

The cocktail was also an opportunity for Kate Spade shoppers to ogle the starry guests. “I just love her,” one shopper said when Mamet walked in, while a duo of friends were rendered starstruck with Glazer and Jacobson’s arrival. “I’m such an Abbi,” the fan said. “And I’m your Ilana!” her friend said in return. A “Samantha-or-Carrie” moment for Millennials.

“My man and I have moved like four times maybe in the past three years, and we’ve had many parties in all of our homes, and they’ve all been lovely,” Mamet said. “We’re actually kind of about to redo our apartment and our house upstate with a lot of the Kate Spade stuff. We’re redecorating all the time. After moving from his apartment to mine to his to a house together to now our apartment, it’s a weird amalgamation of all this stuff. And then throw in four moves and a puppy — I’m like ‘no one should sit on this rug anymore.'”

The pop-up spans a range in price, with books and paper goods costing around $20 and larger furniture items priced near $4,000. “I love the china,” Lloyd added. “Even if I’m doing a dinner party and I invite friends around, I might do a takeaway curry but I’ll serve it on proper plates. A very New York way.”

Though Glazer and Jacobson argued they’ve rarely had a housewarming party, they do throw a good house party from time to time. More rager than quiet dinner party. “Abbi has really good house parties. And they’re not necessarily for housewarming [purposes],” said Glazer. “The first one was…technically,” Jacobson added.

“She has a special drink that’s featured, and you have the ingredients to put it together. It’s dope,” Glazer continued. “I got it from my brother, they’re classic drinks,” Jacobson explained. “His go-tos are Moscow mules and dark n’ stormys, because ginger beer is in both. And then I always make a little sign. But I think it’s about having different areas — different levels, spaces, so you feel like the bar is here, and here is a thing where people can wander around. Even if you have a small space.”

Glazer’s best party? “I haven’t done it for a couple of years, but I do a 4/20 party, and I love setting up a weed table,” she said, which might sound familiar for fans who’ve been watching the third season of their hit show — her character Ilana does just that in a recent episode. “The weed table is exactly from Ilana’s,” Jacobson said, referencing the scene. “Right — forgot about that,” Glazer said. “I have limited experiences and we draw upon those.”