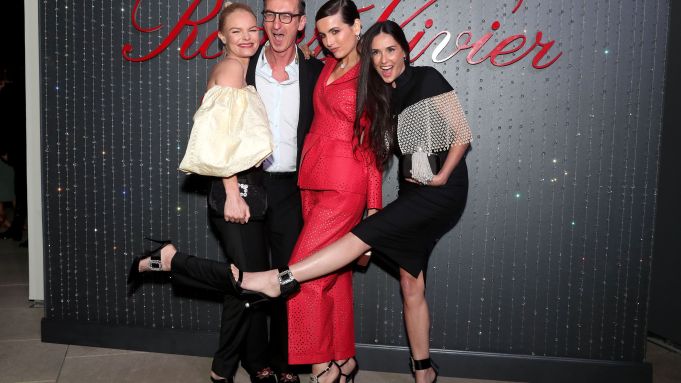 Moore, whose fashion-party appearances are few and far between compared to the other guests, said, “I’m a great fan of Bruno’s first and foremost, and these fantastic shoes are a reason to like, step up and dress up. Believe me, I want these,” she said pointing to a pair of the Slidy Viv satin sandals. Chimed in her BFF Eric Buterbaugh, “They’re coming for me in silver.” But of her stiletto sandals, Moore said, “They’re actually fairly comfortable. There’s something so glamorous with Roger Vivier and Bruno just has such a spirit, a joie de vivre they say, he really does. It’s nice to do things for nice people, it’s just the energy.”

Frisoni, who chatted with WWD earlier at his favorite hotel — Sunset Tower — does have energy. “I never get jet lag. I’m very good at time differences. But sometimes going to Asia can be more complicated,” he said before calling to the waiter, “Short espresso, please. And by the way, do you have chocolate sorbet?” They didn’t, but Frisoni settled for a scoop of chocolate ice cream and offered spoons to share. He only arrived on Tuesday and jetted out the morning after the party, but he said, “I think three days in Los Angeles for a two-hour cocktail party is a lot, no?”

Of the success of his Sneaky Viv and Slidy Viv styles, he related, “I went into Opening Ceremony with my friend Anne Crawford, who was wearing the Sneaky Viv with a dress, and all the kids wanted to know about the sneakers. I thought we were late with the trend, to be honest.”

Clearly the ath-leisure look is here to stay, but Frisoni said his aim wasn’t to capture a younger customer. “Doing the sneakers was not trying to get the 20-year-olds coming to buy it, it was trying to get the true customers to understand that Vivier is also a younger brand spirit, and if you have the 20-year-old who can afford Roger Vivier, why not? But we didn’t want to change our customer, we just wanted to show her what we can do, and have the generational thing happen on its own.”

Back at the party, things got a bit rowdy. “Usually I am the first to jump on the table, but maybe now I’ll have to jump in the pool,” said Frisoni. Nobody did due to the chilly night temperature, but countless others including Belle and Driver reveled in Boomerangs.

In the lobby on the way out, Jasmin Shokrian filmed China Chow trilling, “sparkle shoes!” as she perched on a black marble side table and held up the hem of her Issey Miyake pants. “Now, let’s go to the In ‘N’ Out party.”