Kate Upton Premieres ‘The Other Woman’ in New York

The screening, hosted by the Cinema Society and Bobbi Brown at the Paley Center for Media in Manhattan, brought out the film’s stars. 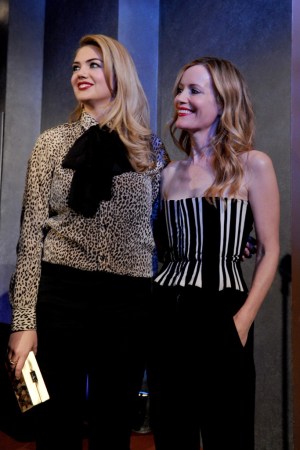 Kate Upton was in New York Thursday night for a screening of “The Other Woman,” a comedy that marks her big-screen debut and stars Cameron Diaz and Leslie Mann. The model flirted her way down the red carpet in Saint Laurent, waxing poetic to each reporter about her first movie experience. “We shot in the Hamptons, New York and the Bahamas. I could not have asked for a better experience,” she said. “And I got to do it all with Cameron and Leslie. I want to take them with me for anything else I do now.” Had the Sports Illustrated cover girl caught the acting bug? “Oh yeah.” Any projects coming down the pipeline? “Nothing I can talk about right now.” Look at that — one movie and already talking like a pro.

The screening, hosted by the Cinema Society and Bobbi Brown at the Paley Center for Media in Manhattan, brought out the film’s stars as well as a female-heavy crowd that included Gayle King, Zoe Kazan, Doutzen Kroes, Lindsay Ellingson, Fern Mallis, Martha Hunt and Pat Cleveland. “To all the guys out there, we love you,” said Upton. “Seriously, you guys will see this movie and feel good about yourself. Like, ‘I’m not that bad!’” Costar Nikolaj Coster-Waldau was absent (perhaps still recovering from last week’s violent “Game of Thrones” episode), so it was up to Taylor Kinney to fill the testosterone quota for the evening.

In the film, the three leading ladies hatch a plan seeking revenge against Coster-Waldau, a womanizer who toys with their affections. Kinney echoed Upton’s fondness for the Hamptons. “I grew up outside of Philadelphia, so my vacations were Ocean City, Maryland or Wildwood, New Jersey,” he said. “I never got as far as the Hamptons. Shooting out there was a treat. Trust me, it wasn’t work.” Switching to the subject of the film’s plot, Kinney wondered which costar might extract the most vicious vengeance.“Cameron could kick my ass and Kate is learning things, but Leslie, I don’t think she would stop,” he said. “She would kick your ass, and then she’d get upset about it. But then she’d go back and it would be something exponentially worse. It would just keep snowballing. So, yeah, I’m going to go with Leslie.”

Later, Mann was pleased by the young actor’s response. “I like that. I like to be scary. I need to go ask him what he means by that…” En route to confront Kinney, however, Mann found Upton. The duo hammed it up, with Mann at one point seemingly explaining what would happen if Upton had worn her vintage bustier (hand gestures insinuated an explosion would be involved). Diaz soon joined Mann for a series of joint interviews, during which the pair performed a well-rehearsed comedy routine that involved drawing mustaches on a sleeping Upton. “So we took some eyeliner,” started Mann. Diaz interjected, “You know, like those liquid eyeliner pens?” The bit appeared later that night on “Late Night With Seth Meyers.”