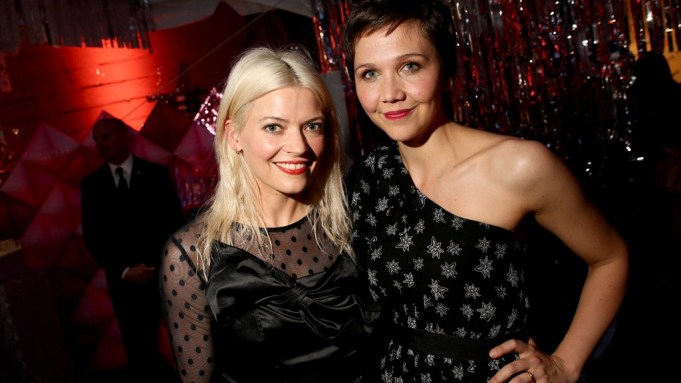 Kate Young on Tuesday was the undisputed queen of a prom-themed party to celebrate her Kate Young for Target collection, which launches Sunday.

“I’m really grateful and overwhelmed,” said the celebrity stylist. “I’m not used to being on this side of things.” Still, Young enjoyed designing so much, she said, “I would love to carry on with it. It has been an amazing experience.”

Wearing a look from the line — a black strapless bow dress over a polka dot bodysuit — Young posed with Target alumnus Jason Wu. “We’re hand in hand,” Young said of the designer. “We’re going to take the fashion world by storm.”

Decked out in shimmering confetti and pink neon, with a giant disco ball hanging from the ceiling, the gym at the Old Cathedral School in Manhattan’s NoLIta neighborhood was transformed into the setting of a sophisticated high school dance. The prom theme “was drawn from my inspirations,” Young explained. “I love Confetti System [tissue paper transformed by artists Nicholas Anderson and Julie Ho into visual displays] and the combination of red and pink together.” Tissue paper corsages in orange and red were distributed to guests at the door. Loopy straws shaped like “Kate” in script lettering were tossed in drinks, and eats were of the treacly sweet variety.

The party had more than an air of authenticity. While the building no longer functions as a school, male guests attested to the fact that it once was, noting that the commodes were barely a few feet off the floor. It was comforting to know that not all A-list actresses were prom queens in high school. “I was home schooled, so no, [I didn’t go to the prom,]” said Michelle Williams. “I was invited to somebody’s dance.” Wearing a white satin blazer and black satin shorts from the collection, Williams said, “I’m going to get a lot of use out of this little blazer. There’s a black jumpsuit that I adore.” The actress said she had just taken some time off after finishing “Suite Française,” also starring Kristin Scott Thomas.

Maggie Gyllenhaal, a client of Young’s, said of the party theme, “My mom and I always said getting ready for the prom was so much more fun than going. I went with a bad-boy older boyfriend when I was a sophomore. I went to my senior prom with my boyfriend.” Gyllenhaal, who wore a Kate Young for Target one-shoulder long dress in a star print, said she was coming off filming two movies, “White House Down” with Jamie Foxx and Channing Tatum, and “Frank,” with Michael Fassbender and Domhnall Gleeson.

“I graduated from high school a year early and went to the prom with my best friend,” said Kate Mara. “I remember it being a lot of pressure.” Mara, who’s about to start the second season of “House of Cards,” will appear in the sci-fi film “Transcendence” with Johnny Depp.

It turns out Young has a lot of experience with high school socials. “I went to a bunch of proms — weirdly,” she said.