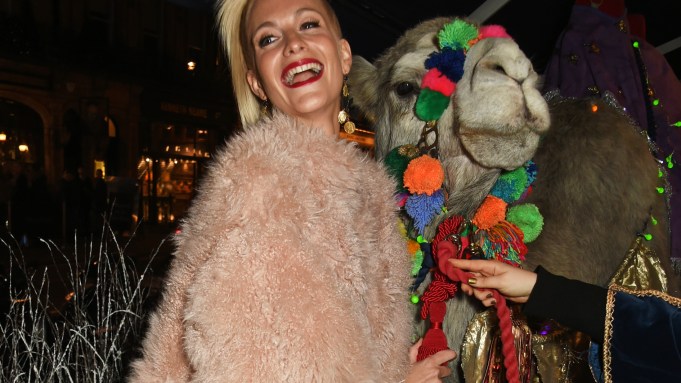 GOING NATIVITY: A real, live camel called Kocoso, festooned in lights, gold lamé and pom-poms greeted guests at the Love Magazine Christmas party at George Club in Mayfair, earning plenty of cuddles and starring in many a selfie as guests arrived for the now-annual event.

“We had a donkey two years ago and had two reindeer last year, so we had to think about what animal we hadn’t had already and it turns out penguins are very shy. So we got the camel and he’s gorgeous,” said Love editor in chief Katie Grand, in Prada, with her Chaos Fashion “KG” monogrammed phone cover slung around her neck.

“I’m actually terrified of Christmas,” Grand told WWD. “The Love Advent Calendar has become this thing that we start in May and now if we don’t get 15 million hits in a day we get disappointed. It’s massive.”

This year’s Love Advent campaign has seen the likes of Kim Kardashian, Kendall Jenner, Rita Ora, Bella Hadid, Irina Shayk, Chrissy Teigen and Taylor Hill among others, starring in an array of titillating films on the magazine’s web site, thelovemagazine.co.uk.

“The first Advent [film] we did was ‘My Rabbit Cara’ with Cara Delevingne. Victoria Beckham did the voice-over, singing a version of ‘Careless Whisper’ which was ‘Careless Whisker,’ with lines like ‘I’m never gonna hop again,’ ‘guilty paws ain’t got no rhythm,'” she recalled. “You start these things and they seem quite innocent and you watch the numbers get bigger and bigger and before you know it, you’re really ambitious with it.”

Grand, who will be spending the holidays on the coast at Lamu in Kenya, cohosted the party with Poppy Delevingne, who wore a Burberry gown and told WWD of her family’s unorthodox Christmas plans.

“We like to play naked Twister,” she said with a wink. “And we don’t have a tree this year. Because we’re spending Christmas with my sister, Chloe, and she isn’t doing a tree. Instead of presents this year, we’re donating to Save The Children; with the Syria Appeal and everything that’s going on, it doesn’t feel right to give presents.”

Giles Deacon had the first shift on the DJ decks, playing tracks including Riohv’s “Green Room 12” followed by Scratch Massive’s “Day Out of Days” soundtrack “Turn Away,” and “Girls Just Wanna Have Fun” by Chromatics. He was followed by Matty Bovan, who favored Britney and Christina, and Nathan Gregory Wilkins and Jarvis Cocker, who was taking his turn with Steve Mackey — with lots of fun retro tracks like “Another One Bites The Dust,” “Copacabana” and The Sugarhill Gang’s “Rapper’s Delight.”

Deacon was planning to spend Christmas in London and said he’s of the more-is-more school when it comes to tree decorating. “I had my tree delivered this morning. It’s 7 feet tall and sat outside my front door waiting for me. I’m very much a maximalist with Christmas decorations; the more the merrier. Tinsel, lots of lights and decorations,” he said. “I’ve got a good selection of decorations that I keep wrapped up in four Fortnum & Mason’s hamper baskets. I will go and buy some new ones but I like to build my collection. There’s no theme; There’s whales and penguins, funny Murano glass ones, really cheap and also really expensive ones.”

The party turned into a bit of a family occasion, as befits a Christmas party. Patsy Kensit brought along son Lennon Gallagher, who recently made his modeling debut in Love, shot by Alasdair McLellan, who was also at the party. Elizabeth Saltzman came with son Harry Walker, and Ozwald Boateng was escorted by daughter Emilia.