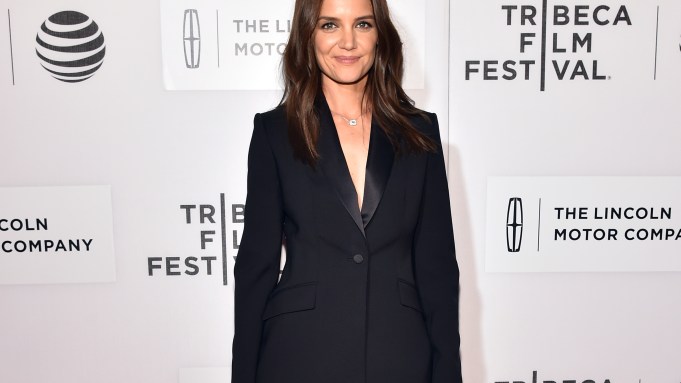 Katie Holmes has moved from dabbling in the director’s chair to embracing the role full-on. On Friday night at the TriBeCa Film Festival she debuted “All We Had,” her first feature-length film as directer.

“Every time you do a project you learn something,” said Holmes, who previously directed shorts for ESPN and AOL. The script for “All We Had” is based on a book by Annie Weatherwax. “I’ve always been interested in directing. I read this book and I decided to try it,” she continued.

The movie is set during the peak of the Recession and subprime loan crisis. A homeless mother, struggling to make a better life for herself and her teenage daughter, eventually lands in a small town and finds employment at the local diner. As they are embraced in their new community and their life begins to normalize, a sketchy real estate agent enters the picture.

“I optioned the book because I was inspired by the mother-daughter story, and there aren’t a lot of stories that explore that relationship,” explained Holmes, who also stars in the film. “You know, we’re all daughters, and most of us will be mothers, and it’s beautiful and complicated no matter were you are in life, or where you live. So that was inspiring to me.”

Costars Eve Lindley, Mark Consuelos, Odiseas Georgiadis and Judy Greer came out for the premiere, as well as TriBeCa Film Festival cofounder Jane Rosenthal, who is a producer on the film.

“What a tough job: to set up the shots, run the whole day, everyone’s asking you questions, you have to have all the answers, you’re the lead. And then you gotta do that every single day,” remarked Consuelos. “I was really, really impressed.”

Designer Zac Posen, whose relationship with Holmes has been well-documented, mentioned that he had visited her on-set when the film was shooting in Staten Island.

“I’m beyond proud of her. It’s very cool to see a friend creatively reach another level,” said Posen. He noted that the actress was carrying another debut down the carpet as well. “Tonight she’s in my first Brooks Brothers tuxedo,” he said.

What red carpet would be complete without a fashion credit?