The face of Ann Taylor's Spring 2011 ad campaign celebrated with the brand at a sun-enhanced lunch in Los Angeles. 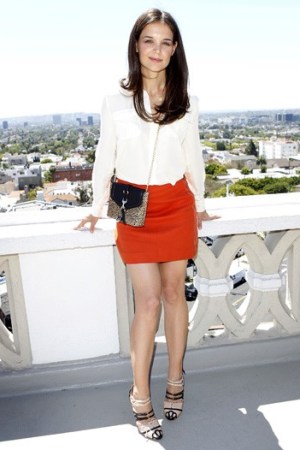 Katie Holmes, the face of Ann Taylor’s Spring 2011 ad campaign, celebrated with the brand at an al fresco lunch Tuesday at Chateau Marmont.

“I’m definitely not a fan of the winter months,” Holmes said. “After Christmas, I always want to fast forward to April.”

Holmes and guests Keisha Whitaker, Perrey Reeves, Sophia Bush and Shiva Rose each showed off their warm weather style by working pieces from the brand into their own looks. Holmes paired a skirt with one of her Holmes and Yang blouses, Whitaker sported a color-blocked top with her pink Rag & Bone jeans and Reeves draped a necklace over a dress she stole from her “Entourage” wardrobe.

Meanwhile, Mrs. Tom Cruise has three films coming out this year — the thriller “Don’t Be Afraid of the Dark” with Guy Pearce, the comedy “Jack and Jill” with Adam Sandler and the indie “Son of No One” with Channing Tatum — but said she also had to call upon her dramatic skills for the Ann Taylor shoot by Tom Munro.

“You work to create a character and a story, and you hope that the way you see it complements the way they see it,” Holmes said, who called the shoot “playful and natural.”