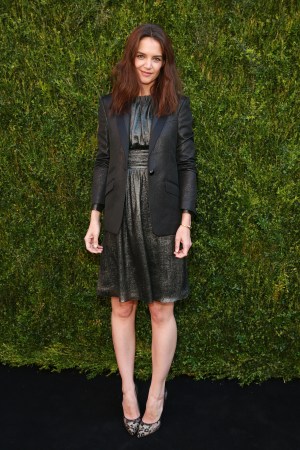 “I’m proud to be a female filmmaker,” Rose McGowan said Friday afternoon, after slipping into The Odeon during Jane Rosenthal’s remarks. The occasion was to celebrate the women in film participating in the TriBeCa Film Festival with a lunch, sponsored by Chanel for the first time, ahead of their annual dinner, set for Monday at Balthazar. “For a while I fought that title,” McGowan said. “But, yeah, I am different and that’s great.”

Holmes is due to make her directorial debut later Friday night when her film “All We Had” premieres; Greer stars in the film.

McGowan, who was on the Sloane jury at the festival, continued that the bulk of what goes on in Hollywood would cause shock to the masses. “The baseline problem starts with the fact that most writers are men,” she said. “I was just sent a script to direct and one of the introductions for a character was ‘Mary, 20, has a body and a face for partying’ — and this was considered a good script, fully financed and with distribution. It’s wild. You guys don’t get to see the disgusting things. This stuff is gnarly. People don’t realize how dark it is.”

On a lighter note, Rosenthal, the festival’s cofounder, spoke of how inspiring she’s found the lunch over the years. “We started doing the lunch 14 years ago because we realized there were so many women filmmakers and we wanted everybody to gather and to see the community that we all have and the resources that we have in one another,” she said. “My company is 80 percent women. We talk about this as a new subject but with TriBeCa we’ve always been about women’s voices. TriBeCa and diversity go hand in hand.”

When addressing the crowd later, she even threw in a little plug for Hillary Clinton — an appropriate occasion to do so, the audience seemed to think.

Topping Rosenthal’s list of female-made films bowing at the festival are “The Return,” “Adult Life Skills,” “Women Who Kill” and “All This Panic.”

Similarly excited about Ingrid Jungermann’s first feature, “Women Who Kill,” was Parker Hill, a 2015 graduate of film at NYU who is making her second appearance at TriBeCa with her film, “One Good Pitch.” “It’s kind of amazing to see so many amazingly impressive women in a room,” the director said. “Events like this, it’s so great to just see what other women are doing but also meet other women. I have a great network of filmmakers and not that many of them are women. And it’s great to meet more women who are doing what I want to do.”