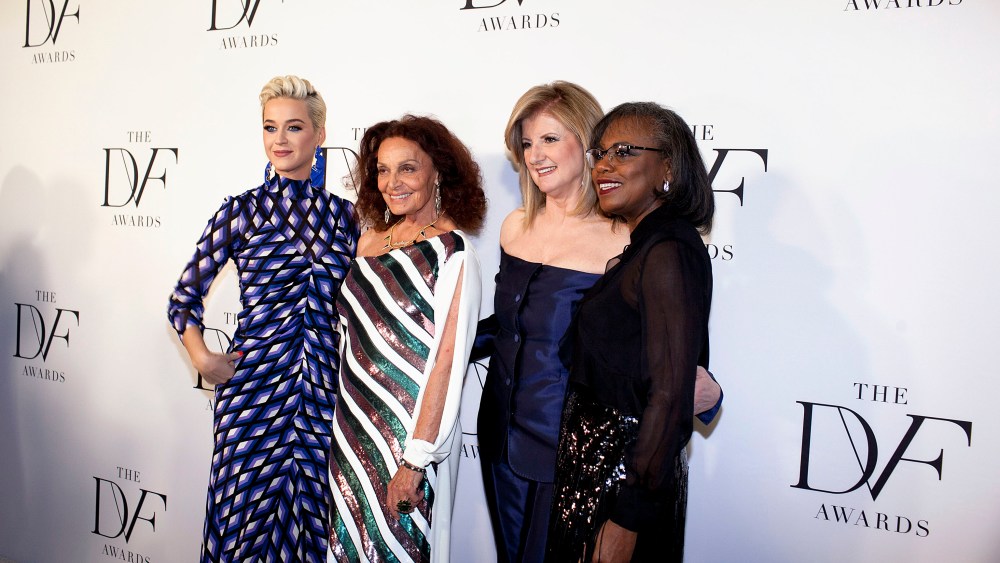 On Thursday night in Brooklyn, Katy Perry was the recipient of the Inspiration Award at the 10th annual DVF Awards, held this year at the Brooklyn Museum. But Perry, in her acceptance speech, still made a point of keeping things light.

“I put the ‘con’ in confidence,” she joked once she reached the podium to accept her award. “And I’m very nervous because my Spanx have ridden all the way up my thigh in such a way that…

“Anyway,” she laughed. “The goddess energy in this room is undeniable.”

And indeed, the powerful women who attended the DVF Awards this year — Diane von Furstenberg herself; the award recipients Professor Anita Hill, Hadeel Mustafa Anabtawi, Nadia Murad and Susan Burton; presenters Gloria Steinem, Julia Stiles, Arianna Huffington and Allison Williams, and performers Chloe and Halle Bailey — contributed to a larger-than-life feeling in the air. Each woman spoke about what they were working on; Stiles, marking the 20th anniversary of her breakout film “10 Things I Hate About You,” just wrapped filming a new series “The God Committee,” while Chloe and Halle are at work on their new album.

“One of the things we do when we start writing, we have to be centered,” Halle said. “What’s so funny is, we actually just converted our garage into our home studio, because we moved. It’s new energy, it’s fresh. And we are really loving what we’ve started on so far.”

If you were under the impression that Perry was the biggest celebrity in the house last night, think again. When Hill entered the press room a couple hours prior to the show program, flashbulbs went off in rapid-fire time, while reporters and bystanders clamored for an iPhone photo of the woman who made history by coming forward with sexual harassment claims against Clarence Thomas in 1991. When Steinem introduced Hill onto the stage to accept her Lifetime Achievement award, she described Hill as “fan-f–king-tastic.”

Despite winning the accolades nodding to her 62 years of service as an activist, Hill said she feels she’s “just getting started.”

“In 1991, I was put through a process designed to make me disappear as so many women who spoke up about abuse had in the past,” she said.

Hill explained that she received letters after the trial that helped her through the pain — especially one letter from a retired woman who reached out to her. “She said to me in her letter, ‘There will be waves of women coming after you.’ And the waves started to come immediately. The waves did not stop in the Nineties. The waves continued into 2017 with the brave stories of the women in the #MeToo movement. The waves will continue. And so will I.”

Lydia Fenet Wrote Her New Book in Under Three Months