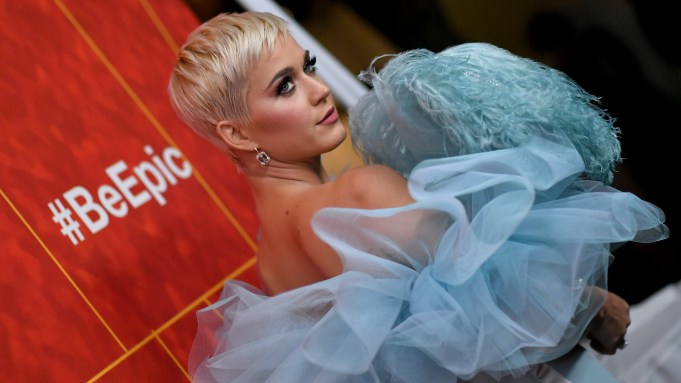 “This event is so very important,” Heidi Klum said before stepping off the blue carpet at The Wallis Annenberg Center for Performing Arts to attend Thursday night’s AmfAR Gala.

Klum, who has been a guest at the global fete in Milan, New York and Cannes, continued by saying, “Until we find a cure I’m going to keep going, but I hope I don’t have to go so much anymore because I hope they do find a cure.”

The ninth annual benefit also drew a slew of other celebrities including Orlando Bloom, Victoria Justice, Leslie Mann, Judd Apatow, Chris Tucker, Robin Thicke, Rumer Willis and Eve, who were all in attendance to help fund AIDS research and bolster awareness of the epidemic.

“I feel like I get educated every time I come,” said Grammy-winner Eve, who recalls having the AIDS awareness talk with her now-husband Maximillion Cooper.

“We were both too scared to actually talk about it or too embarrassed to actually bring it up,” she said. “But your health is your everything. Period, point blank. If that person who is with you truly loves you, that person will understand that. For you to have a healthy relationship you need to be healthy together. Talk about it, there’s nothing to be ashamed of. The sooner you know, the better it is.”

Inside, guests sat down for a candle-lit dinner and were serenaded by Emmy-winner Darren Criss, who took on 17 of Katy Perry’s hits in just under 10 minutes.

As the evening went on, it was laced with opportunities to bid on items such as truffle hunting in Piedmont, Italy, artworks from Dan McCarthy and Mane Sakic, as well as a surprise bid for a Disneyland trip with one of the evening’s two honorees, Katy Perry.

After she was given the Courage Award by Los Angeles Mayor Eric Garcetti, Perry said, “You may or may not have heard that I’ve come from a Bible-thumping background that wasn’t particularly open or accepting of curiosity. For instance, I wasn’t allowed to eat Lucky Charms. Luck was too closely associated with Lucifer, obviously. I may not have known it then, but daring to ask questions and re-defy right and wrong when everyone around me spoke in absolutes was my first attempt at a courageous life.

“There are so many people, many in the room in fact, that are making an enormous impact with the work they do every day with no spotlight on them and no stage to stand on,” she continued. “They are heroically working to find a cure for HIV and AIDS to prevent disease transmission and to help end the stigma of living with this disease. Silent and humbling courage is all around us.”

Also on hand to accept an award was Toms founder Blake Mycoskie, who lauded AmfAR by saying, “The reason why I love this organization so much is because they’re like, ‘We’re going to have a cure by 2020.’ They say if you’re going to set a goal, three of the most important things are you write it down, you tell a ton of people who are accountable and you set stakes. Very few nonprofits that we hold accountable do that, but AmFar does.”

Closing out the night was a performance from the Grammy Hall of Famer Dame Shirley Bassey. And while there were many excited for the set, Willis was especially eager for her to take the stage. “She’s one of those iconic women and I’m just a huge fan of that kind of music. That’s my genre; I don’t really listen too much to new music,” she said. “She’s what I have on in my house all the time.”