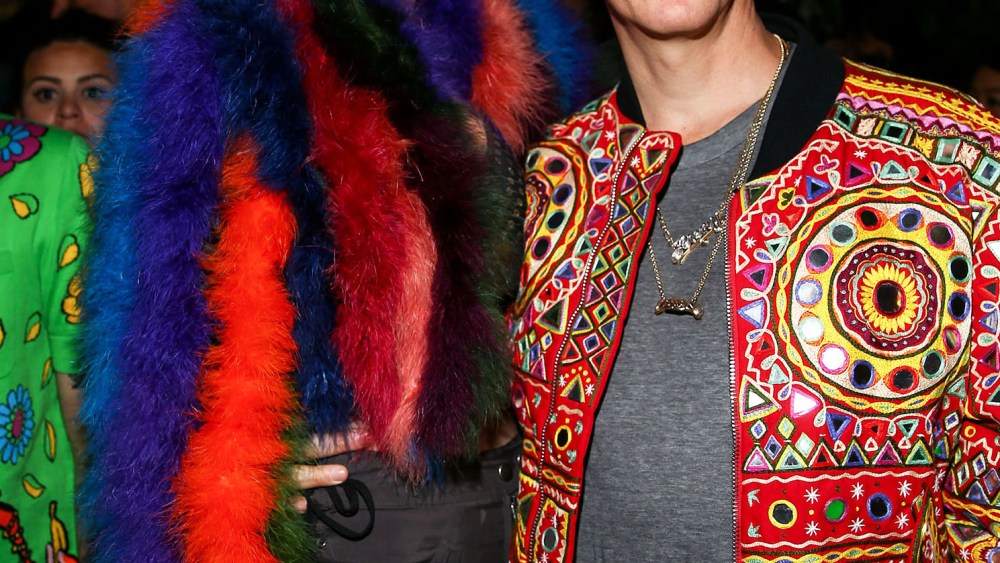 Despite their packed plans, the two continued their fest tradition of partying into the wee hours of the morning together. The besties hopped onstage while Mia Moretti DJ’d, with Perry taking over the turntables at one point. The duo had barely enough time to recover before Perry’s Easter brunch on Sunday in celebration of her shoe collection, but the party pros somehow managed to press refresh in time.

Also spotted pulling all-nighters: Kylie Jenner, Kristen Stewart, Rita Ora and Emily Ratajkowski showed up in time to catch Lil Yachty’s crowd-pleasing, profanity-laced set. Before the madness unfolded, Scott chatted with WWD about his long history at the outdoor music extravaganza, becoming a morning person and his plans to mark his 20th anniversary as an independent designer.

WWD: How many years have you been to the fest?
Jeremy Scott: I’ve been coming to Coachella for more than 10 years. The first one I came to is when Björk played the first time, which maybe was 2002 and then I came repetitively to the festival and parties and events and things, but this is the 10-year anniversary of having my actual own party.

WWD: Why do you love Coachella?
J.S.: Because I’m from the OG side, I hang out in trailers all day long and make clothes for people I love. It’s very much a part of me, and music is so much a part of what inspires me and what I design. It’s a symbiotic relationship [with musicians] because what I create helps personify who they are. I’m inspired by what they’re doing, they’re inspired by what I’m doing, and sometimes then we also create things together.

WWD: Tell us about your Candy Crush collection.
J.S.: I wanted to bring the screen alive and wrap your swimsuit, wrap your backpack, wrap your shorts, and then I love their font and their little words like “tasty” and “sweet” and “delicious,” so we made Moschino in the same font to play with that. So many people love the game, and I love playing with pop culture in that way. It’s something really unexpected. I do a lot of things with nostalgia of course, but this is something that’s so pop culture today.

WWD: What makes your partnership with Moschino work?
J.S.: I think that my DNA and [Moschino founder] Franco [Moschino], so closely matched even though it’s about different times and things, and at the same time I can still effortlessly embody the spirit of what the original brand stood for. That’s why it makes so much sense and why it is so easy. I don’t think that comes along that often, frankly.

WWD: Did you take a power nap so you could stay awake for this rager?
J.S.: I thought I was going to and then I was like, ‘I’ll have an iced green tea so I’ll have a little kick of caffeine,’ and I forgot to sort that out.

WWD: Are you going to be up in time to attend Katy Perry’s brunch tomorrow?
J.S.: I swore to her I would go, so yes.

WWD: Who did you dress for the festival this year?
J.S.: I haven’t really done anything custom for anybody. Obviously Serayah McNeill [is] wearing stuff. [Lady] Gaga has stuff. I don’t know what she’s going to wear. It’s always one of those things: wait for your eggs to hatch to count your chickens.

WWD: What’s next?
J.S.: September’s my 20-year anniversary and I look so young! We’re preparing for that doozy of a show for New York. I’m trying to manifest what I’m going to do. I have to design the collection. We’re going to mark it as a really momentous occasion. It’s 20 years of being an independent designer. And I’m your American boy.

WWD: You’re 41. What keeps you young?
J.S.: SoulCyle! I think my best advice is laughter, literally just having fun.