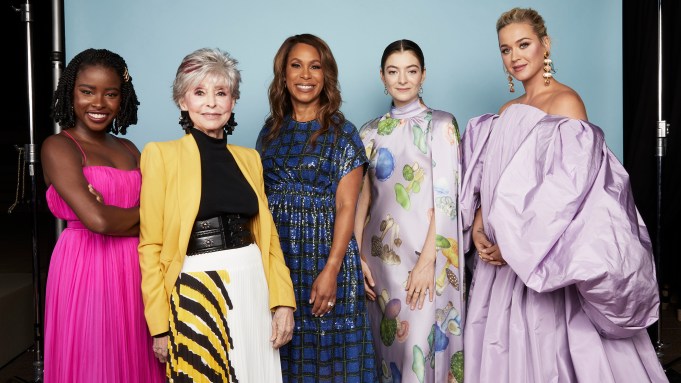 “They said, ‘Business and cocktail’ — I said, ‘I don’t play by the rules,’” exclaimed Katy Perry onstage at Variety’s Power of Women dinner on Thursday night. She was referencing the dress code while clad in a voluminous, corseted lilac Schiaparelli gown.

In the open air just outside the Wallis Annenberg Center for the Performing Arts in Beverly Hills, Perry was being honored alongside fellow music artist Lorde, poet Amanda Gorman, actress Rita Moreno and entertainment executive Channing Dungey (the first woman to be chairman of Warner Bros. Television Studios and first Black executive to run a network entertainment division as ABC president) for their activism and philanthropic work.

Perry thanked her sister Angela Hudson, who helps run The Firework Foundation, Perry’s organization that uses the arts to support children in underserved communities, as well as one of her longtime managers, Ngoc Hoang-DelVecchio of Direct Management, and her fiancé, actor Orlando Bloom (giving a shout-out to their one-year-old daughter Daisy Dove).

“Orlando, a man that is a friend and an ally to women all around the world, thank you for handling the insanity of my life with such loving grace,” said Perry. “And biggest thank you of all for being an incredible father, an example to our greatest gift ever, our daughter Daisy Dove. And to my Daisy, a future powerful woman. I pledge to you to do my best to be an example of one, to never put limits on your dreams, to lead with love, never through fear, and to always be your lighthouse in any darkness.”

Perry was the last to take the microphone, leaving the audience with a performance of “What Makes a Woman.”

“Orlando, can you undo my corset?” she first asked, before he obliged to cheers and laughs. “It’s a little tight. I can’t sing.…All the way down. OK, now I can breathe.”

Earlier in the night, the mood was more solemn, with each honoree using the spotlight to discuss the subject of the evening: power, its meaning and responsibility.

“Power like mine should be interrogated,” said Lorde, who was recognized for her environmental work with New Zealand’s 350 Aotearoa. “In the past few years, we’ve all seen that no system of power is too big to fail, no person in charge too established to uproot.…When we talk about power, about the amplification of a single voice, we must also acknowledge those who do not have such amplification. Tonight, I think of the women whose birthplace or skin color or socioeconomic status was always going to make it less likely that they be handed a megaphone or the women who climate change will affect long before it affects me.”

“Power is a tool that can be wielded in many ways, with many outcomes,” offered Rita Moreno. The “West Side Story” actress — who will next be seen in Steven Spielberg’s remake in December as she turns 90 this year — was being celebrated for her work with RotaCare Bay Area, which provides free medical care for those in need. “It can be so bloody seductive, particularly for women who have been deprived of it for so long. But how we use it will ultimately be what defines us.”

Moreno was presented by Gloria Calderon Kellett, while Gayle King introduced Perry. Other presenters were Ava DuVernay (for Dungey, who works with Children’s Institute), Hunter Schafer (for Lorde) and Angelina Jolie, who welcomed Gorman.

“The young woman of grace who stepped fearlessly to the podium on Inauguration Day,” Jolie said of the 23-year-old, who works to empower girls with Los Angeles-based mentorship organization WriteGirl. “Not just the youngest, but the strongest voice we could ask for in that moment.”

Jolie, who brought her 16-year-old daughter Zahara Jolie-Pitt as her date, continued, “There is nothing more beautiful, more challenging and perhaps unsettling than the free mind of a thinking woman. And that is surely why so much effort is put into constraining her. And it is why those who have the power of free speech, the weapon of free speech must combine to defend those who do not. We need voices like Amanda’s, those lights in the dark. Amanda, may you burn fiercely and light the way for others.”

Gorman, who received a standing ovation, giddily replied that she was “a huge fan,” before reciting a poem to a captivated audience.

Paxton Smith, too, was in attendance, getting onstage to share her own powerful words. The teen — who went viral for her speech as a high school valedictorian on Texas’ new restrictive abortion law — told the crowd: “The time for silence on the issue has come and gone. There is no more time for complacency. There is no more time to wait and see what happens next. Because the very thing that we’re afraid of is happening right now. Every citizen of Texas who has the reproductive capability of carrying out a pregnancy has had a fundamental freedom stripped away from them, the fundamental human right to decide what we do with our lives. And the unbearable truth is that that could soon be the reality for far more than just Texans.”