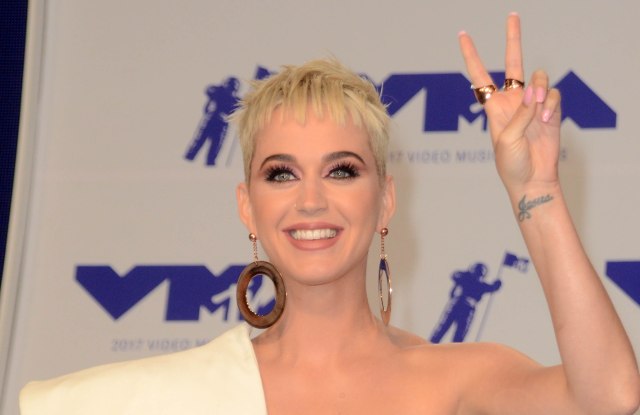 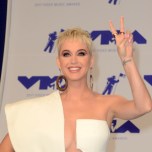 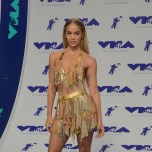 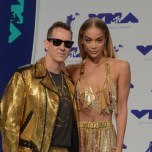 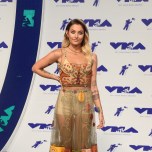 Demi Lovato, Jared Leto, Kesha, Nicki Minaj, and the evening’s host Katy Perry were among those turned out at 2017 MTV Video Music Awards held at The Forum in Inglewood, California on Sunday night. While a ton of starry names walked the black and white striped carpet — including early arrival Lorde, pretty in pink Monique Lhuillier –musicians stayed mostly mum and instead let their stylists and designers do the talking for them.

“It’s Fifties, Sixties country Western vibes,” Getty added. “Miley sent a couple old school names over. We dug into the archives and it snowballed after that. It was really natural.” The collaboration came about when Cyrus reached out. “She contacted me personally. She really wanted to collaborate with a friend and I admire that.”

Getty—who also dressed Gigi Gorgeous for the red carpet—drove over with GLAAD President and CEO Sarah Kate Ellis. The duo attended with six transgender service members and veterans. “It’s so important to have their voices be heard,” said Getty, an LGBTQ advocate, “especially when somebody is literally trying to silence them.”

Jeremy Scott attended in support of his BFF Perry. “Katy’s going to knock it out of the park,” he said. “She could host anything. She’s a pro. She’s so clever and she’s got the right attitude.” Scott has a long history with MTV, having designed the VMA pre-show in 2015. “So many of the people I dress are musicians, so this is a world that I circle and I love,” he said. “It’s like being with family. That’s what MTV and the VMAs feel like. You can let your freak flag fly.”

Scott was flanked by model Jasmine Sanders who he dressed for the night. “I was feeling very gold,” he explained of their coordinated look. “Jasmine [Sanders]’s aka is Golden Barbie, so I thought, ‘What if I just made this gold Swarovski crystal mesh kind of look for her?’ I feel like we’re pulling it off. Jasmine is.”

“It’s very sexy,” cooed Sanders on his arm. “It’s about time I show a little bit more skin on a carpet. If there’s a time to do it, it’s with Jeremy. I think it’s getting a good response.”

Stylist Law Roach, best known for dressing Zendaya and Celine Dion, was responsible for Lovato’s sheer Zuhair Murad ensemble. “It’s a new relationship for me,” said the America’s Next Top Model judge. “I hope I did a good job because she is an awesome girl. She looks beautiful.” Roach said the look was inspired by the edgy award show. “I think it’s a bit different from what Demi has done before,” he said. “I always try to bring out a little something else in my clients.” He said they tried “at least ten” different options before finding the one. “I’m always over-prepared—just in case.”

Ocean Park Standoff musicians Samantha Ronson, Ethan Thompson, and Pete Nappi were most excited about the evening’s performances, particularly Kendrick Lamar, Pink, and 30 Seconds to Mars. The band said they’ll soon be releasing new music of their own. “We’re putting the finishing touches on our next single,” said Ronson. “We’re excited about that. It’s more of our vibe which is a mash-up of our three styles—smushed together.”

“Housewives” star Kyle Richards made it a girl’s night with Mena Suvari and Jennifer Bartels who star on her new show “American Woman.” Had the trio attended the VMAs before? “I went a long time ago,” laughed Suvari. “I came with my niece Paris [Hilton] years ago,” added Richards. “It was a lot then and it’s a lot now. Overwhelmed is the only word in my mind right now.”

The women were on hand to hype up their show which also stars Alicia Silverstone and will premiere early next year. “It’s inspired by my life in the seventies,” Richards explained. “We wanted it to feel like you’re living in 1975. And I think we nailed it.” Suvari said she relished the wardrobe. “I would get lost in the costume department,” Suvari gushed. “It was too much fun. One of my favorite pieces that I have to gush about was this a-line shift dress and the photo that was attached to it was of Twiggy in that same dress and it was for Alicia’s character Bonnie. How special to be wearing something that Twiggy wore.”