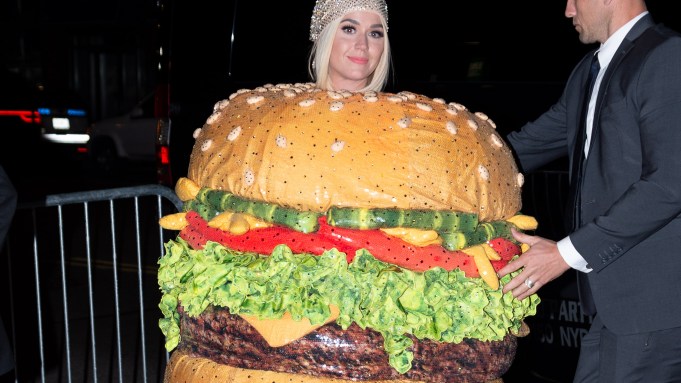 Many Met Gala guests are known to do an outfit change after the main event at the museum, shedding their more movement-restrictive wares for late-night party ensembles. For Moschino guest Katy Perry, that costume change evolved from a lit-up chandelier into a juicy hamburger.

Cellophane toothpick atop her head, Perry ascended the stairs into the VIP area of Moschino’s after party at the Playboy Club with a sly smile, joining Jeremy Scott — who donned a matching hamburger jacket — and Gwen Stefani, truly tickled by the campy effort. But fear not: the plush hamburger came apart, revealing Perry in a lettuce-green frock underneath.

The Playboy Bunnies, dressed in black bodysuits with a white stuck tail to their backside and bunny ears, blended perfectly into the crowd as they distributed trays of mini burgers through the early hours of Tuesday morning. While the club’s servers reportedly went through a recent turnover due to poor service, they were enthusiastic to interact with what was likely an atypical crowd for the venue. Amanda LePore, Aquaria, Maluma, Dilone, Christian Combs, Patrick Schwarzenegger, Kacey Musgraves, Taylor Hill and Daphne Groeneveld all stopped by throughout the night, eager to dance to the mid-Aughts heavy playlist.

The party proved to be a late-night stop on the circuit, but just when you thought you’d seen it all, in walked Karlie Kloss and husband Joshua Kushner, in good spirits as they sipped cans of Perrier.

Camp will always keep you guessing.