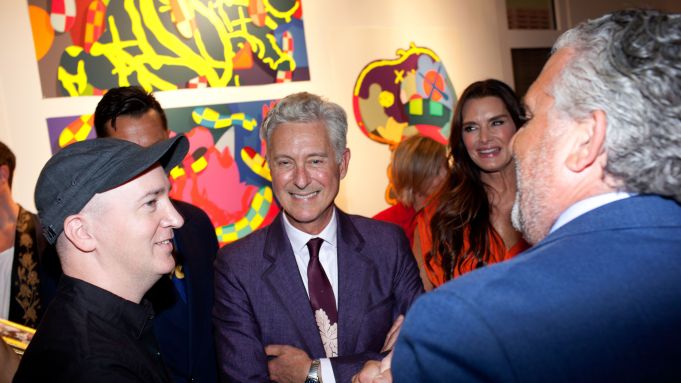 The crowded cocktail hour at the New York Academy of Arts’ Tribeca Ball was like a giant game of “Where’s Waldo?” come to life. But instead of Waldo, the man to find was the low-key artist Kaws, aka Brian Donnelly, wearing his signature cap. The academy’s five floors were packed with art — all for sale, to benefit the school — glittering stilt walkers, a contortionist, a harpist, palm reader, a Sousaphonist, and activations by event sponsor Van Cleef & Arpels. There was Naomi Watts, Brooke Shields, Liev Schreiber, Donna Karan, and more. There was much to distract, but Donnelly, the event’s honoree, was weaving between the micro studio spaces chatting with the artists.

“It’s just such a talent pool in one place,” said Donnelly, removing his thick-frame glasses. “It’s really hard to digest in an atmosphere like this, but at least you can get samplings and take names and come back and learn more.”

The artist has had an amazing few weeks, with the debut of a public sculpture in Hong Kong and the recent sale of one of his works at auction for a record $14.7 million. Academy president David Kratz bestowed an honorary degree upon Donnelly during dinner, and also revealed the creation of a Kaws Scholarship fund for the school. What’s next for the popular Brooklyn, N.Y.-based artist?

“A few things,” said Donnelly, before continuing on to meet more artists. “In Detroit next month I have a show at MOCAD [Museum of Contemporary Art Detroit]. So I go there at the end of the month to paint a wall, and then I go back for the opening.”

Nearby, another man better known by a moniker was handing over his payment info. Kevin O’Leary — Mr. Wonderful — and his wife Linda had already found two pieces to buy. “I found a really interesting artist with a really interesting image of perhaps her grandmother’s legs,” he said of one of his new acquisitions. “We love this event, because there’s some really great raw talent here. We’re always buyers, we just buy what we like, what catches your eye, and that’s it,” he added. “You really just have to go with your gut on this. You never know what’s going to happen.”

Event chair Swizz Beatz, a friend and supporter of Kaws and emerging artists, arrived just before dinner, having come from the Bronx Museum’s gala uptown.

“Anything that has the words ‘New York’ and ‘art’ is golden,” said Beatz. “Anything that’s positive, that’s art in New York, I want to be part of. And we’re honoring my brother Kaws tonight, so I’m here to celebrate him and have fun,” he added. “I love that he started as a graf writer and now you can look at auction sales of 14 million, so it’s like, sky’s not the limit — it’s just a view.”

Delirious at the New Museum Gala