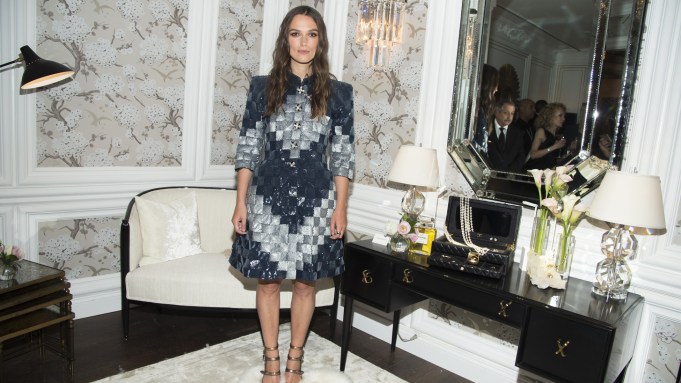 When Chanel lays out the carpet, the wildly attractive flock two-by-two — taking their considerable Instagram followings along for the ride.

Such was the case Tuesday evening at Bergdorf Goodman, where the French fashion house hosted a dinner to celebrate their new fine jewelry “ephemeral” pop-up boutique on the retailer’s seventh floor.

“I mean, it’s Chanel,” said Hari Nef. “They’ve been really sweet and are really great people. It’s my first Chanel event in New York. I went to one in Paris and felt like such an American. This feels more like home.”

The French touch still resonated, with canapé’s and Champagne served in the boutique before guests headed into Bergdorf’s BG restaurant for dinner.

Knightley, who arrived in New York just hours before the event, is presently hard at work preparing for her next film project. She’s set to star as the Sugarplum Fairy in the forthcoming “Nutcracker” film, due out in 2018.

“Ballet is a part of it, but, actually, no I’m not dancing as the Sugarplum Fairy because I’m not that good. Misty Copeland is in it, though, and I’m very excited,” she said.

If there is one fashion style that remains consistent across Knightley’s many roles, a tulle petticoat would be it. “I am fascinated with a lot of history,” she said of her natural gravitation toward period roles. “I’m fascinated by how we don’t change. The world around us can change, but people appear to be caught in the same emotional cycles. We’re in different places, but the way we behave is similar.”

“I think if we look at Chanel, the brand has always had a strong audience in the U.S., particularly in New York,” he said. “This [Bergdorf’s pop-up] marks a new era for Chanel fine jewelry in the U.S. Chanel as you know is a privately owned company and things tend to happen very organically for us, which is nice.

“[The U.S.] is a very strong market and a very dynamic market as long as you bring creativity to the market. I hear the same reports that you do but we have a targeted strategy in place.”