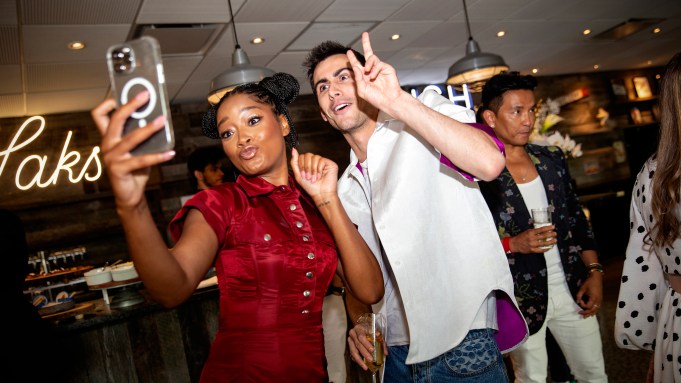 Saks’ annual summer kick-off dinner was no ordinary swing by, say hello and bounce to the next affair. First, guests were collected via black car, which shuttled them to Blade’s East River lounge, where glasses of rosé and pink tequila cocktails were offered inside a plastic wine bottle-turned-travel-tumbler. One by one, LaQuan Smith, Prabal Gurung, Christian Cowan and Fe Noel, some of Saks’ New York-based designers, rolled in to the riverside terminal, where wristbands were doled out and guests were swept up in luxury helicopters and carried over the New York skyline (the photo ops? Immaculate).

The destination was Lunch, Lobster Roll in Southampton, the second iteration of the beloved Amagansett seafood shack. The space bore reminders of its diner roots, but had been completely transformed by Saks for the evening: champagne and blood orange margaritas greeted guests, fresh from their helicopter rides, as did trays of oysters and shrimp, clam strips and fried mozzarella bites. The blue booths were decorated with orchids, and the bar was lined with candles and caviar bites (guests were each sent home with a miniature duffle filled with ice packs and little rounds of caviar).

In addition to the above, other fashionable faces in attendance included Brandon Maxwell, Tanya Taylor, Rosie Assoulin and Alejandra Alonso Rojas. The evening was hosted by Saks’ Marc Metrick as well as Keke Palmer, the multihyphenate who is soon to be seen in Jordan Peele’s newest film, “Nope.”

“I’ve been doing a lot of hosting so it’s fun that they thought of me for this,” Palmer said of working with Saks for the night. She’d chosen a burgundy bodysuit and pencil skirt from LaQuan Smith’s spring 2022 collection for the evening’s look (shopped from Saks, of course).

“I wanted to wear something that was definitely comfortable, and I like to have something with a bit of a sporty vibe to it, so when I saw this I loved the nylon material because that gives you the sports vibe, but at the same time I wanted to be elegant, so the cut and the shape just really got me. And then of course, we kicked it up with the Alexander McQueen shoes,” she said. “[My style] ranges. Sometimes I can give you a little Julia Roberts, other days I can give you back-up dancer. I can give you fashions, a little Diana Ross — I really go with my mood. I have a very eclectic personality and I don’t take myself too seriously, so I really have fun with fashion.”

As soon as her time in the Hamptons wrapped, she was headed back to Los Angeles, preparing for the “Nope” premiere, as well as her upcoming European tour in promotion of the film.

“I’m getting ready to go to Rome, Berlin, London. It’s pretty different: with ‘Lightyear’ I did London, but just the one international stop, so to go to all these places is definitely different,” she said. “They are not playing over at Universal.”

She’s reuniting with stylist duo Wayman + Micah for the tour, whom she worked with in her early 20s.

“I’m excited for what we’re going to cook up for this premiere because I know it’s going to be something so interesting,” she said.

Mostly though, she’s excited the highly anticipated film will finally be out.

“I’m not a secret holder, so the fact that I have this big thing that I’ve been holding and no one knows and I can’t really share, it gives me anxiety,” she said. “So the fact that I can finally just be like ‘ya’ll know!’”

Palmer was seated next to Metrick for dinner, who plugged her movie to the crowd before encouraging guests to go all in when eating their buttered-up lobster rolls that night. After the lobster came key lime pie and root beer floats and, just after 11 p.m., it was time to chopper back to the city.