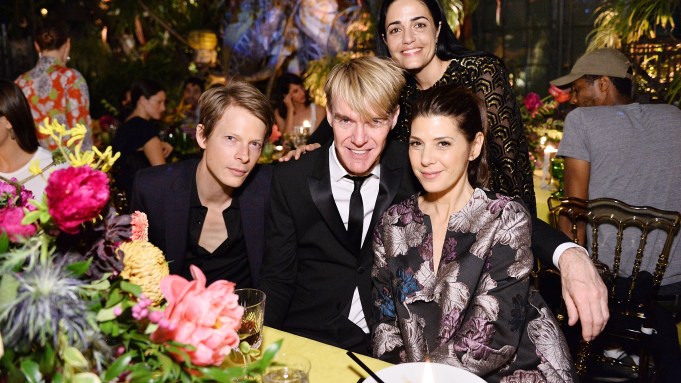 It was theatrics, interior details rich in history and a garden fitting of a storybook fairytale that was the backdrop for Los Angeles brand Co’s dinner celebration.

A group of some 50 guests were invited to designer and artist Tony Duquette’s former home Dawnridge Estate in Beverly Hills for a dinner celebrating the opening of the brand’s first shops-in-shop at Neiman Marcus Beverly Hills, making it neighbors with Stella McCartney, Marc Jacobs and Altuzarra.

“We’re pretty young as a brand to be offered [a shops-in-shop] of that size with a store as amazing as Neiman Marcus was a big honor,” said Co cofounder Justin Kern, who added the plan is to eventually have more of those shops at other locations.

The brand, which has counted Neiman Marcus as a retail partner for the past year-and-a-half, pulled some elements — albeit pared down — from the Duquette house for its shop, according to Co cofounder Stephanie Danan.

There was certainly plenty to choose from just in the drawing room where iron screens decorated with sunbursts — the centers of which are actually hubcaps — flanked a doorway leading to the home’s former garage.

“I felt it was important to save what was left — [Duquette’s] work, his wife’s work — and so that’s what I’ve done,” said Hutton Wilkinson, Duquette’s protege and business partner. “And so I think it’s nice to have this party tonight and I think they are very talented.”

The setting was a fitting one with the home used to shoot Co’s resort look book but also featured a dozen looks, styled by Neiman Marcus senior vice president and fashion director Ken Downing, mixing the label’s fall, resort and spring collections with Tony Duquette jewelry.

Guests gathered in the drawing room just past the home’s entrance, where the looks on models were being presented. Those who came included a mix of celebrities such as Marisa Tomei and Mia Maestro and designers such as Clare Vivier, Kendall Conrad, Jerome Mage, Irene Neuwirth and Sonia Boyajian.

“We selected the pieces and then Ken did his magic,” Kern said.

Brooches pinned on skirts and large statement necklaces were layered into the looks.

“The house being so decorative and so embellished, it made sense to bring a little of the house into the ready-to-wear and to give the girls that opulence with a relevance to our lives today,” Downing said. “We spent all afternoon just adding and subtracting.”

The idea was to be seasonless — a timely notion considering the raft of designers trying their hand at see-now-buy-now collections in the recently ended fashion weeks across the globe.

“I don’t believe that there’s a fall and a spring anymore because it’s almost the end of October and it feels like it’s August,” Downing said. “I mean, designers talk about a fall collection and, it’s like, please don’t tell me about seasons. Let’s just talk about beautiful clothes customers are going to want to wear in season. I love that the clothes are transitional. They’re transeasonal and they speak to a lot of different women.”

So what was Downing’s take on designers who more recently tried their hands at instant fashion? He called out Rebecca Minkoff, Tom Ford and Burberry among the successes, something he talks up with anyone he can.

“It is real,” he said. “The customers are following the collections on their phone, on their computers, on their desktops and they’re excited in the moment. And if you can give the customers within a reasonable period of time — it doesn’t always have to be the clothes are available immediately following — because when you’re excited you want what you want. We don’t have the attention span anymore to wait for clothes for six months. It doesn’t matter how old you are [or] how old you’re not.”