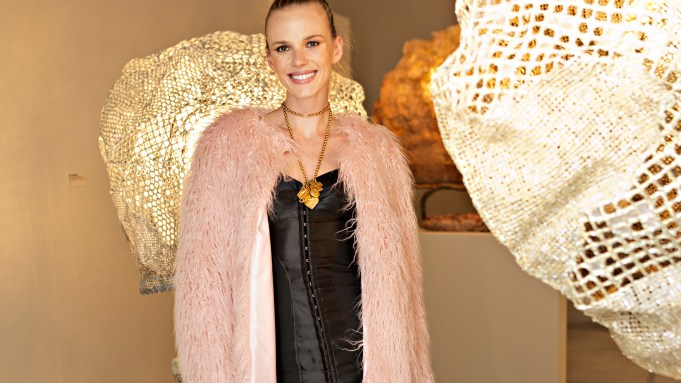 Guests arriving at Ken Fulk’s party on Friday night to celebrate his new Saint Joseph’s Arts Society were greeted at the landmark former Catholic church by a frisky lineup of priests, cardinals, and popes, all friends of Fulk in costume.

“Ken is our Pied Piper and we are happy to follow him where his dreams and visions take us,” said designer Geoffrey de Sousa, attending with his husband, photographer Jose Manuel Alorda. “Ken has enriched the cultural life of San Francisco with this grand gesture, superbly done.”

St. Joseph’s Arts Society is a new membership club to inspire dialogue on the arts, fashion, food, craftsmanship, design, and tech. “It’s a community dedicated to offering emerging and established artists from around the world an inspiring forum and exhibitions,” said Fulk.

St. Joseph’s is housed in a 22,000-square-foot Romanesque revival church in the heart of San Francisco that was destroyed in the 1989 Loma Prieta earthquake and had fallen into ruin when Fulk and his team got to work. Built in 1913, St. Joseph’s is listed in the National Register of Historic Places and has been designated San Francisco City Landmark #120.

“I especially admire the way Ken and his team of architects and historic restoration specialists maintained the integrity of the beautiful interior,” said Hale as she gazed at a series of original rose windows and the dramatic dome above the chancel.

Prix de Rome winner, photographer Catherine Wagner, an arts professor at Mills College, installed one of her dramatic photo images, a 30-foot-high print of Room of the Scholars at the Capitoline Museum in Rome, around the former altar.

“When Ken asks you to be involved with his projects, you jump in, and I completed installation two days ago,” said Wagner.

Fulk, surrounded by associates in golden angel gowns, greeted guests in a dark grey bishop’s soutane with amaranth red piping with authentic pellegrina shoulder cape. It was all very authentic, but his grin and his cocktail signaled subversion.

“I’m honored to have worked with the best restoration specialists and decorative artists and landscape designers and architects and seismic retrofit engineers,” said Fulk of his three-year-long endeavor. “And the collaborations continue with Carpenters Workshop Gallery taking up residence on the mezzanine.”

“Only Ken could bring together all of these accomplished and creative people, and only Ken has the breadth of imagination to see a place of celebration, ideas and fun in a destroyed church,” said interior designer Catherine Kwong, gazing at the newly installed floating balconies, Oriental carpets, and Pierre Frey curtained salons.

In one of the six private salons along each side of the nave, Belgian photographers and taxidermists Jaap Sinke and Ferry van Tongeren displayed their large-scale bird and animal photography and signed their new book published by Lannoo.

“We met Ken in London, we bonded over taxidermy, and he invited us to be the first art exhibit at St. Joseph’s, “ said Sinke.

Van Tongeren and Sinke also created the six 10-foot-tall black bears standing on plinths in the arches above the nave. The life-like bears, crafted of papier-mâché, waved a series of vivid ecclesiastical heraldic banners.

Mathilde Froustey, a principal dancer with San Francisco Ballet, and her fiancé Mourad Lahllou, a Michelin-starred chef, plan to marry at St. Joseph’s next June.

“It’s the perfect combination of art and classic beauty,” said Froustey, a longtime friend of Fulk’s.

Ramdane Touhami flew in from Paris to introduce his new Buly 1803 apothecary, candles and skin care collection. Fulk is the biggest client in the U.S. for his cult candles.

For Fulk, party heaven is in the details. Guests headed home with beribboned packages of shortbread decorated with St. Josephs’ logo, though most of them were devoured before the Ubers arrived.