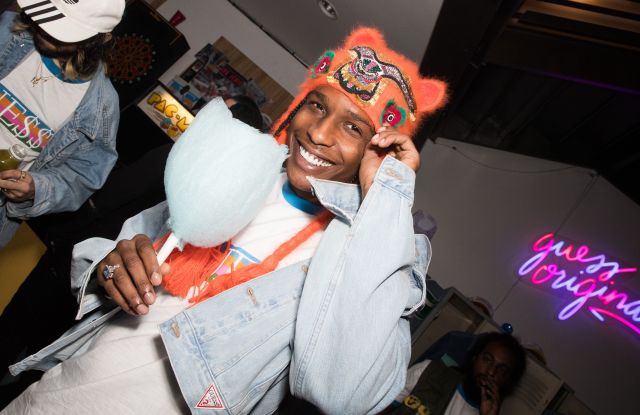 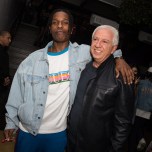 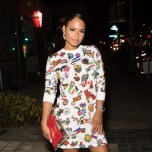 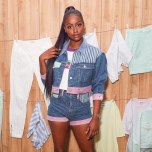 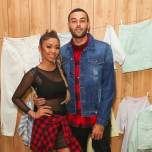 Kendall Jenner was the biggest supporter among those who turned up in Hollywood on Friday night for a last-minute party celebrating the Guess Originals x A$AP Rocky “GUESS Club,” collection created by the denim giant and designed by the hip-hop and fashion star.

A converted storefront had been transformed into the Guess Clubhouse by the brand and AWGE, a creative company started by Rocky, whose given name is Rakim Mayers. The weekend pop-up shop, located at 741. N La Cienega, stocked all the coveted merchandise, which will also retail in boutiques such as Opening Ceremony.

Mayers kicked off the event with a press conference, taking questions from journalists from the stairs of a three-story “tree house” inspired by his childhood fantasy. “I always wanted a tree house growing up, but you can’t have that when you live in an apartment in New York City,” he said. Mayers was decked out in track pants, one of the collection’s rainbow-striped logo t-shirts and a denim jacket accessorized with a knit hat that was a present from Gucci’s Alessandro Michele. Of the jacket, Mayers noted, “It’s a women’s jacket, I’m just rocking it. None of the pieces in the collection are men’s pieces; they’re either unisex of women’s-only.”

After he was done answering questions about the collection and his music (Michael Jackson would be the person he’d most like to have dinner with), guests were able to explore the space, where they played ping pong, arcade and video games, hung out inside an indoor tent, browsed Nineties CDs from a jukebox and munched on old school candy and ice cream treats. Mayers first went for a cone of blue cotton candy, offering some up to fellow guests.