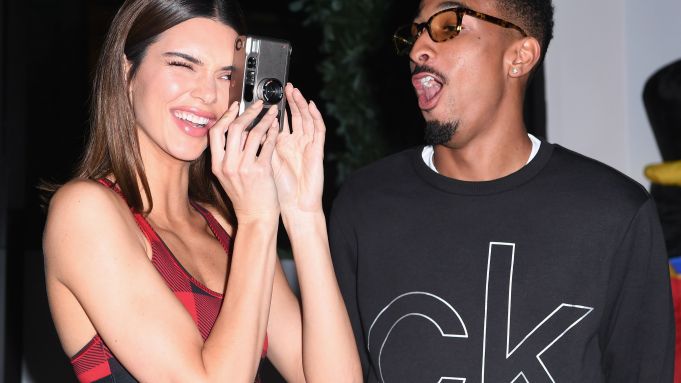 Hot cocoa and a warm fireplace make for a cozy holiday pajama party, but for Calvin Klein, the pajama party needs a live band, music by Taco Bennett and host Kendall Jenner.

Jenner arrived after a musical set by Too Many Zooz, the New York City-based music group comprised of Matt Muirhead, David Parks and Leo Pellegrino, who performed in the mock snow on the venue floor, and kicked off the festivities with a camera in hand and with former Odd Future member Taco, who provided music for the night.

The BFF’s did a five-second countdown ending with the Christmas trees hanging from the ceiling lighting up, and Taco beginning his set with a rendition of Michael Jackson’s “P.Y.T.” and Kanye West’s “Good Life.”

While a customization station was bustling with partygoers looking to snag Calvin Klein Underwear boxer briefs and pillowcases, the makeshift bed in the room’s center was the stage for models and guests — who included 18-year-old YouTube star and “Stupid Genius” podcast host Emma Chamberlain — to dance and sing around a set of pillows.

She’s looking forward to spending time with her loved ones this holiday season, and said that if she threw a pajama party she’d invite her two best friends, her parents and her cat. Who else would you need to invite, really?

“I would play it safe,” the vlogger said. “What if you invite someone you don’t know, don’t vibe and then it’s awkward. And now you’re with somebody that you’re not comfortable with at a party, that’s not fun.”

She joked, “I know Mom and Dad always make parties fun for me. I’m kidding, but not really.”

PVH Not Betting on Christmas, but Looking for Deals in the New Year