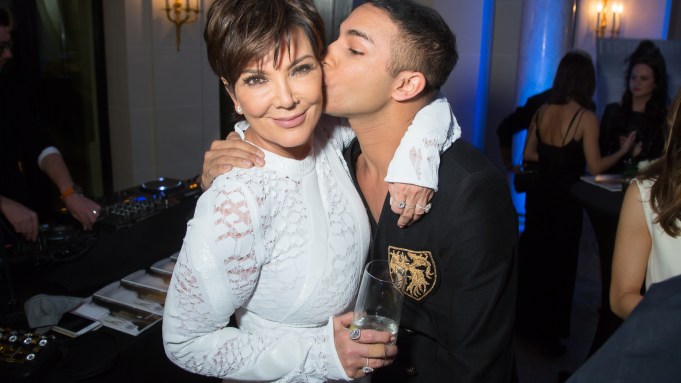 The publication was celebrating its spring issue with a “Women in Power” theme, featuring the Jenner matriarch, Kim Kardashian as its cover girl, Ivanka Trump, Jennifer Fisher and Carolina Gonzalez-Bunster.

“Women are transforming business,” said Editorialist cofounder Kate Davidson Hudson. “We tried to get people with different focuses — Kris, for her marketing genius. She has a gut instinct for what’s right and when and how to approach it.”

“It takes a lot for somebody to get to know their clients and in my case, they are my kids, so it comes naturally,” said Jenner, who was sporting a Louis Vuitton white gown.

She greeted guests barefoot in a salon at The Peninsula Hotel. “That’s Kendall’s way,” she noted, referring to the shoeless style, although her daughter was for the occasion actually sporting Stan Smith sneakers with her black dress and leggings.

“And then I meet [with] people like Olivier, who are dear friends, and the marketing [teams] of Balmain and H&M — I want to work with people whom I feel passionate about,” she continued.

Jenner advised women in business “to find something that you love to do, and if somebody says no you’re talking to the wrong person.”

Meanwhile, her fashion-week whirlwind was set to continue. “Tomorrow, I am going to Chanel — Kendall is walking the Chanel show — I’m gonna go by Miu Miu on Wednesday. And then I am going to hang out with Olivier; we’ll have some personal time together, which I am excited about. And then I’m gonna go to Rome with Karl Lagerfeld for a day and open the [Palazzo] Fendi with Kendall. No big deal, right?” she said with a laugh.

Rousteing praised Jenner. “She’s obviously a very strong business woman, but at the same time [family is] very important. She moves mountains for people she loves,” he said. “I want to bring her outside of Paris and just spend time with her.”

Kroes was gearing up for the L’Oréal Paris party on Tuesday night. “This afternoon, I was trying on clothes. I might wear Alaïa,” divulged the model, who was in town on her own. “My husband is in Val Thorens [the ski resort]. He’s a DJ, so he’s working right now. I have five-year-old and a one-and-a-half-year-old.”

Thierry Lasry, who was also among other guests, had on Sunday hosted a party at Paris’ Raspoutine nightclub to celebrate his latest eyewear collaboration, with tattoo artist Brian Woo (aka Dr. Woo), whose clients include Drake, Miley Cyrus and Chiara Ferragni.

“We engraved different details of his signature print inside the metallic part of the sunglasses,” Lasry explained.

There had been a rush on Saturday afternoon at Colette for the pre-launch of the limited-edition model coming in four colors. Gigi Hadid was spotting wearing a pair en route to the Giambattista Valli show.

Lasry himself has no tattoos. “And I am not getting any,” he said firmly. “That’s the thing I told [Woo] at the very beginning.”