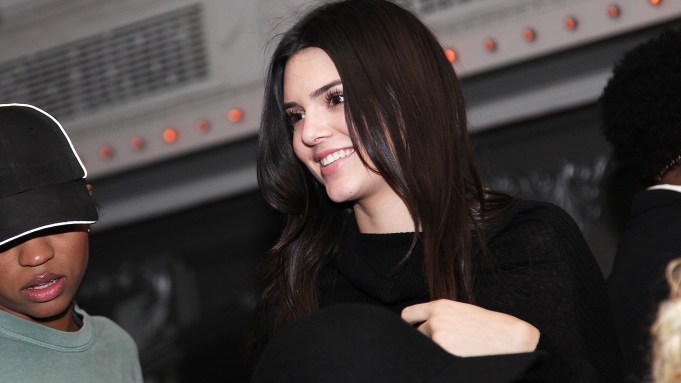 Squad. Clique. Whatever you want to call it — it’s become readily apparent that the Millennials have realized there’s some truth to the whole “power in numbers” thing. And at the center of the thriving, fame-hungry ecosystem seems to be one Kendall Jenner. First there was CaKe, thinning out in recent months as Cara Delevingne has kept a lower profile (for her, at least). Then Gigi Hadid came along, and though Jenner and Gigi never bore an acronym (Gi-dal is just too clunky), they were practically a conjoined entity at one point. It seems as though others (Hailey Baldwin, etc.) are angling to fill the position of new Jenner bestie and most of the finalists made their way to Up & Down in the late hours of Thursday night.

The club is the coda to many a fashion week night — it’s the spot one might see Rihanna show up to at 3 a.m. Every night this week, the club has an official party purpose. Thursday night, it was hosting Kanye West’s record label G.O.O.D. Music’s fashion week party. Yeezus himself did not make an appearance, though his spirit was felt — the DJ played a bunch of tracks from “The Life of Pablo” (this despite the fact that most of the crowd had heard the album in its entirety just hours earlier).

The club was thick with the smell of marijuana as soon as A$AP Rocky and his crew arrived. It was with strange synchronization — at the stroke of midnight — a pack of bodyguards and handlers flooded the entrance, clearing the way for the rapper, Baldwin, Bella Hadid, Devon Windsor and Jenner to get to their table. Most of them had come from The Box, another club, where Rocky had performed at a party for his collaboration with Guess. Apparently the party had been fun. “She’s a little too drunk,” a handler said, waving off a photographer who tried to snap Windsor. Baldwin, surely, would love to be photographed (ideally with Jenner in the shot, too). How did she like the Yeezy show, a reporter innocuously asked. “You know what?” A stony silence. “I’m not doing this here,” she huffed. And from above, Jenner perched on a couch, looked on approvingly. She’s training her well.