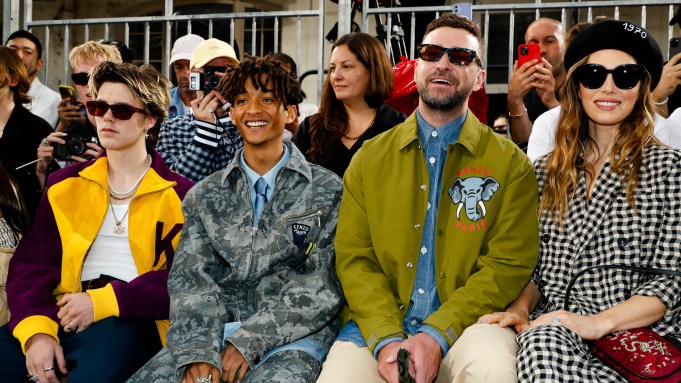 Ansel Elgort showed up in a sharp suit and sunglasses. “I was out until 5 a.m. last night so I’m a bad school kid, and have school this morning,” he joked.

The actor and photographer was sporting a vintage Olympus camera around his neck that once belonged to his photographer father. “I see pictures all the time in real life so when I see it I want to take it and there’s a lot of good pictures around here. Like this guy over here looks cool, but he looked away,” he said, gesturing to the crowd. “You gotta kind of catch the moment and surprise people. It’s about the reflex.”

“Elvis” star Kelvin Harrison reminisced about his high school days. “I was definitely awkward — and I definitely did not look as cool as this senior class but I did have a good time, and I think that is the whole point,” he said of growing up in New Orleans.

He liked the vibe of the show that recalled school uniforms. “I think it’s an interpretation of the 1970s and going to school in what that feels like in your best fit.”

His fit for the day was a floral suit from the brand, which he chose for its hand-painted look. “It felt special. It felt like it had a story and was personal. It’s definitely a form of art in patterns and colors and shapes and stories,” he added.

Lil Dre, who started as a skateboarder and now models and makes music, said he hit up several shows and parties during the week. “That’s why I’m tired,” he said. “It feels like I’m young again — I am young — but it feels like the old days going to high school tired, but I really enjoyed being here. I just loved all the shows.” Kenzo was his last show of the week and he plans to go back to California to “skateboard, chill and get in my jacuzzi.”

“Umbrella Academy” star Justin Min was celebrating the release of the latest season, which dropped on Netflix on June 22. “It was a whirlwind shooting that during the height of the pandemic and I am very, very thankful that we finally get to release it to the world,” he said.

His called his very first time at Paris Fashion Week “insane but fun and exhilarating.”

“I’ve been to Paris a couple of times just doing dumb touristy stuff,” he said. Still, he is planning to go see the city’s Monet exhibit and “take a peek” at the Eiffel Tower while he is in town. “I mean you can’t not go to the touristy spots,” he joked.