The bash celebrated their new tie-in, involving a capsule collection. 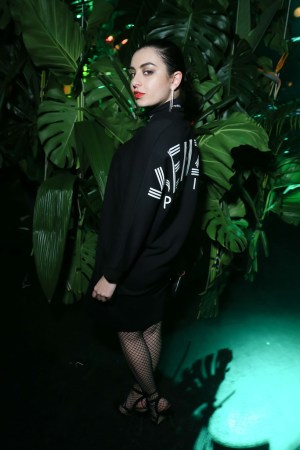 IN THE JUNGLE: There was a tropical vibe at Les Etoiles nightclub on Paris’ the Right Bank, where Kenzo and Disney hosted a “Jungle Book”-themed party Tuesday night just a few hours after the label’s fashion show to celebrate their new tie-in.

“It’s a capsule collection to celebrate the new movie,” Kenzo co-creative director Carol Lim explained at the concert venue filled with lush vegetation for the event, referring to “The Jungle Book” film directed by Jon Favreau that is due out in mid-April — a couple of weeks after the line hits stores.

“If you know about Kenzo’s history, you know that Kenzo Takada started a line called Jungle Jap,” Lim continued. “The tiger, all the references that he made led us to collaborate with Disney. We looked at the archival drawings of ‘The Jungle Book’ as well as the new imagery and our tiger. We did a beautiful print mixing all these elements together. We put it on beautiful dresses, jackets, denim, jersey, sweatshirts — a bunch of different things.”

Lim is a self-proclaimed “Jungle Book” fan. “I love the movie because it represents this duality: The little boy thinks he belongs to the forest. It’s an interesting relationship between humans and nature, but it really talks about how we need to protect nature. My daughter loves it because it’s such a fun movie.”

“I love the music,” said Nicol, one half of The Misshapes with Lezark, referring to the electro tunes mixed by Genera8ion.

The Misshapes did the score of “Time to Choose,” a new documentary investigating global climate change that is by “Inside Job” director Charles Ferguson and due to hit theaters in June.

Nef’s latest project will be premiered in New York on March 19. “It’s a short film that I did this summer called ‘Crush’ with Alex Karpovsky of ‘Girls.’ It’s about women in the art world. I play a gallery owner,” he said.

Guests got to take a piece of the jungle home with them, as the plants were party favors.