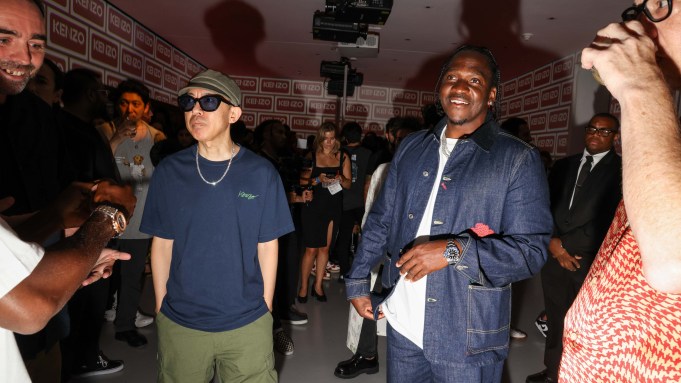 For the fashion crowd that didn’t go east for the weekend, the party was downtown. The draw? Famed Japanese designer Nigo.

Kenzo kicked off Saturday night at the New Museum, where the brand was throwing a rooftop bash in honor of artistic director Nigo. The A Bathing Ape founder was tapped by the LVMH Moët Hennessy Louis Vuitton-owned brand last September, but due to COVID-19 restrictions hadn’t been able to take him on an official welcome tour. The New York party served as the second launch party for Kenzo by Nigo following a Paris event in June; the brand is headed to Tokyo in August.

“For us, it’s very important to celebrate this launch in different places,” said Kenzo chief executive officer Sylvain Blanc, dressed in a long overshirt featuring illustrations by house founder Kenzo Takada from the ‘80s. Blanc nodded to Nigo’s ability to mine inspiration from the brand’s heritage to steer it forward. “The location is amazing,” Blanc added.

The museum’s wraparound balcony offered clear views of the Lower East Side and building where the Kenzo logo was projected for all to see. Inside, Nigo’s Aka-e pottery print, inspired by traditional Japanese ink painting, was projected on the walls and ceiling, creating an immersive environment. “We had this idea of doing [the party] in a museum because we like this link with the creativity of the brand,” Blanc said.

Just after 9 p.m. (early by New York nightlife standards), Pusha T approached the DJ booth and grabbed a microphone as the playlist transitioned from “Graduation”-era Kanye West to Good Music-era Kanye West — Pusha T made his solo debut under the label in 2010.

“New York City, make some noise in this b—h, what’s up, where ya’ll at?” he said, plying the crowd before launching into his featured verse on West’s 2012 single “Mercy.” “Shout out Kenzo, shout out Nigo — first party in NYC, what’s up? You know this is a family affair, let’s get into it.”

Nigo, donning his signature sunglasses and cap nearby, gamely nodded along.