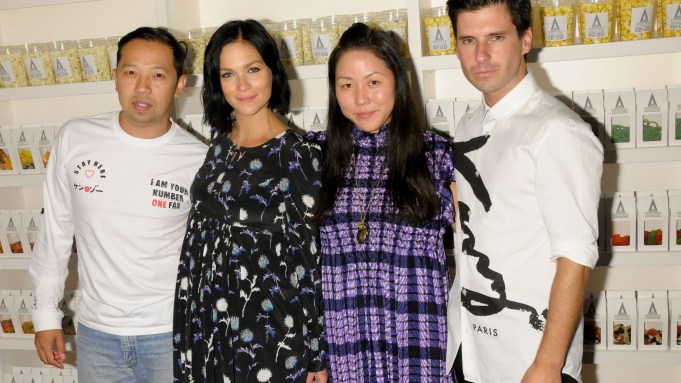 “Uhhh, it’s healthy,” said Carrie Brownstein when asked about her relationship with social media. “I use Instagram and Twitter, but I like to curate what I do. I don’t feel the obligation to over share and have it be a document or even a transcription of daily life. I’m an avid reader of it as a filter for information, but I think as someone that’s interested in the way that people use language, social media is very curious to me.”

Kenzo creative directors Carol Lim and Humberto Leon tasked Brownstein, creator of IFC’s hit series “Portlandia,” with directing the fall 2016 campaign film “The Realest Real,” which explored the topic of social media. In the six-minute video, which premiered Monday night at the Metrograph movie theater in New York, actors including Laura Harrier, Mahershala Ali and Natasha Lyonne brought to life the odd dynamics that are commonplace on the platforms.

“I basically only have Instagram and it’s private and it’s only pictures of my kids,” said Lim when asked how she uses social media. “It’s not that I’m against it. It’s more that I can’t keep up. But in the wee hours of the morning I troll around and look at other people’s sites.”

Brownstein, who met Lim and Leon a few years ago, hasn’t ever worked on a fashion film. But the director said her approach wasn’t any different from what she typically does.

“They didn’t want me to look at the clothing and write a script based on that,” she said. “They told me to just make it beautiful, make it interesting, tell a story and we will put our clothes into the story.”

The screening was followed by a cocktail party where guests including Chloë Sevigny, Rick Ross, Fred Armisen and Jenna Lyons mingled among models wearing Kenzo — what else? — who would, in a very meta way, attempt to simulate being a social media follower by randomly trailing partygoers as they maneuvered around the venue. See the film below: