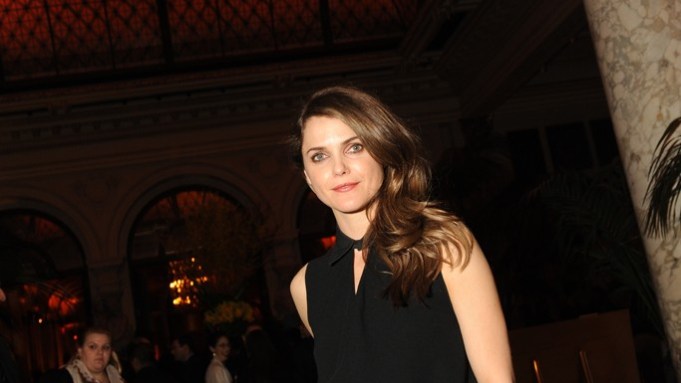 The cast of Cold War spy drama “The Americans” stepped out of disguise and onto the red carpet at The Paris Theatre in Manhattan Monday night for the show’s second season premiere. Keri Russell and Matthew Rhys, who costar as KGB spies paired together through a government-arranged marriage, have embraced the sartorial espionage of the show.

Rhys, clad in a black Armani suit for the screening, disclosed his favorite on-screen undercover look: “I named him Fernando,” the actor said, going on to say he has a thing for giving all the different disguises their own full-blown personas. “I gave him a whole Spanish back story — flamenco teacher, all of that. The ponytail, mustache, small goatee….He’s a hit, Fernando.”

“Everyone loves Fernando,” Russell reiterated, echoing Rhys’ sleek red-carpet style in an all-black ensemble: a Balenciaga silk top and Saint Laurent jacket and pants, slipped over a pair of Jimmy Choo stilettos. “I never get cute disguises. Mine are always strangely androgynous,” the actress whimpered. “But I love my costumes on the show. Sleek trousers and a cat eye, that’s my armor. It feels very feminine and strong.”

And what about those high-waisted Jordache jeans ubiquitous on the show?

“Oh my god, the high-waisted pants,” Russell laughed. “Unanimously, every single girl goes into a fitting and Jenny [Gering, the show’s costume designer] pulls out those pants and it’s like, ‘I can’t get those on, there’s no way.’ And Jenny’s like, ‘Yeah, yeah you can. Lay down, keep zipping them up.’”

Russell, who dashed out of the theater after the producer’s preshow remarks, reappeared an hour later at the after party across the street at The Palm Court in The Plaza hotel. Members of the cast — Noah Emmerich, Alison Wright, Richard Thomas and Susan Misner — congregated at the reserved tables in the back of the room. A solo saxophone player roamed the dance floor, breaking up the monotony of predictable tunes — Eighties Michael Jackson and the inescapable Daft Punk and Robin Thicke anthems.