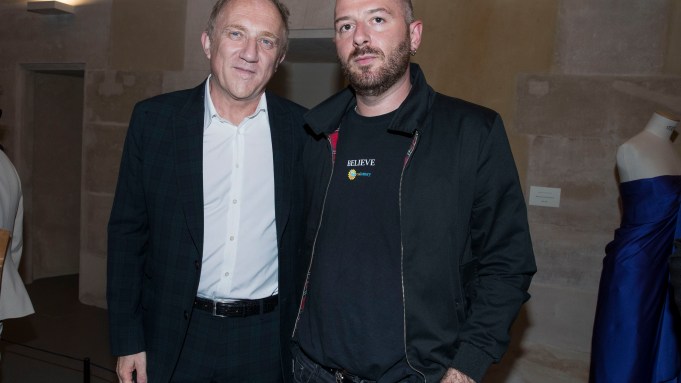 OFFICE GOSSIP: “I’ve never seen any offices look like this,” Salma Hayek exclaimed as she took in the dramatic perspectives and vaulted ceilings of the former Laennec Hospital in Paris, home to the new headquarters of Balenciaga and her husband François-Henri Pinault’s Kering group.

“It’s got soul and history. It’s not just one amazing building by some architect. There’s something more special to it, I think,” mused Hayek, surrounded by mannequins displaying 27 original designs by Cristóbal Balenciaga from the house’s archives.

She was fresh from the set of “Beatriz at Dinner,” by the writer-director team of Mike White and Miguel Arteta that was behind “The Good Girl” — and like Jennifer Aniston before her, Hayek got a major make-under.

“They made me look really ugly. I kind of loved it. It was very liberating,” she said. “He cast very tall women and put very, very big high heels [on them], and me in flats – and the light: they would light me special to make me look worse.”

Scott Thomas said she came for the art exhibition in the former chapel of the building, which featured works by the likes of Hiroshi Sugimoto and Andres Serrano from François Pinault’s private collection.

“I’m quite surprised to see the clothes and to realize how lucky I was that the first dress I ever wore as a kind of famous person to a premiere was a Balenciaga dress,” she said. Pointing to a 1962 linen skirt suit, she mused: “I could have worn that in ‘The English Patient.’”

The British actress will reunite with her costars Juliette Binoche and Ralph Fiennes at the 20th-anniversary screening of the movie in Rome next month. “It was a really bonding film, because we were all very young and very inexperienced, so it was a big break for all of us,” she recalled.

Pahlavi is also no stranger to the brand. The former empress of Iran recalled attending the 25th wedding anniversary of Queen Juliana and Prince Bernhard of the Netherlands in 1962. “I had an orange chiffon dress, and I think it was Balenciaga,” she said. “What I’m wearing today comes from Tehran.”

Gvasalia, meanwhile, keep a portrait of Balenciaga above his desk. “He watches over me but in a good way. It’s about respect,” he said. The Vetements founder was similarly appreciative of his new work surroundings. “It’s slightly monastic. For me, that also fits with the DNA of the house and Mr. Balenciaga’s personality. There’s a logic to it, I would say,” Gvasalia remarked.

Pinault said the three-year restoration of the building, which will be open to the public over the weekend for the European Heritage Days, marked the end of the group’s transition from a financial holding group to a specialist in clothing and accessories.

“It’s wonderful because it anchors the group in an extraordinary place full of history, it gives a lot of meaning to the work that we do and we are lucky to be next to Balenciaga. Having corporate teams next to the teams of a big house is something very, very precious,” he noted.