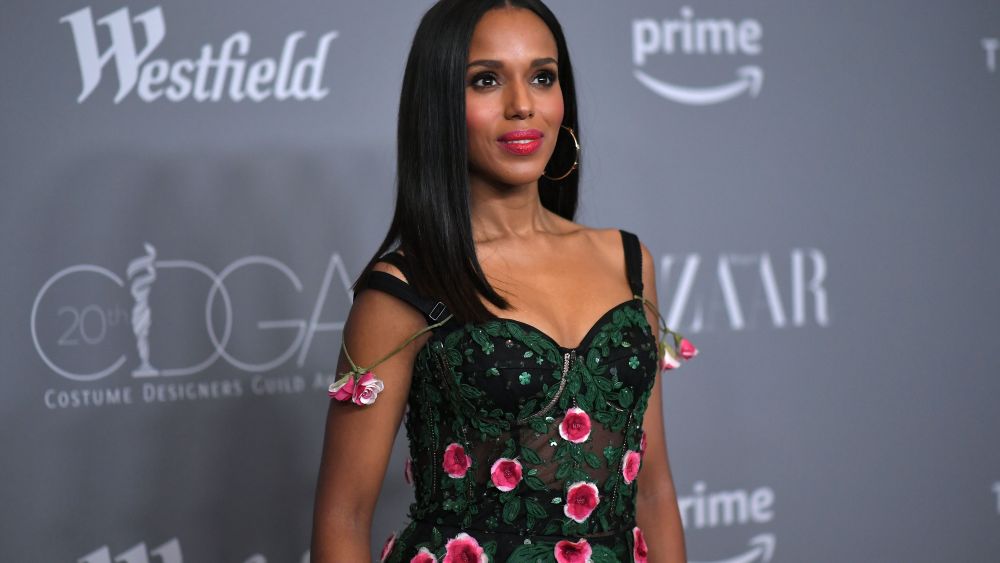 “It’s crazy to be saying goodbye to Olivia Pope,” Kerry Washington said, standing at the podium at this year’s 20th annual Costume Designers Guild Awards on Tuesday night. “Because I’ve been Olivia Pope longer than I’ve been anybody’s wife or mother. Those things are new to me compared to her,” added the “Scandal” star, whose show is in its last season after six years on the air.

Washington was on hand at The Beverly Hilton hotel to accept the guild’s Spotlight Award for her stylish and groundbreaking role on the Shonda Rhimes series. While receiving the honor, the actress paid respects to her show’s costume designer, Lyn Paolo, whom she credited with helping her navigate her real-life pregnancy in 2016. “I told Shonda I was pregnant and then Shonda told me that Olivia Pope was not going to be pregnant,” she reminisced. “I panicked. ‘How in the world am I going to hide this bump? How in the world am I going to maintain that Olivia Pope walk while I’m waddling down a hallway?’”

“I could do it because of Lyn,” Washington reflected. “There were no maternity clothes out there, but she took those beautiful couture Armani pants, cut out the front and replaced it with a panel of growing materials that held my daughter…and held her and held her. I still waddled, but I waddled well-dressed.”

Washington went on to thank Paolo and all costume designers for “giving us a safe place to get naked, creatively and emotionally and physically.”

Meanwhile, a six-months-pregnant Eva Longoria presented Washington with her award and said, “Let me tell you, it’s nerve-racking enough deciding what to wear to these things and then when you’re pregnant…oh my God,” Longoria laughed. “My Spanx don’t fit anymore. But there’s pregnancy Spanx, I’ve [since] discovered.” Even so, Longoria said she was “so happy to be here” and that it was important to her to attend because “when I grow up, I want to be Kerry Washington.”

Brosnahan presented the first award of the night with her “The Marvelous Mrs. Maisel” co-star Hinkle, who plays her mother on the show. “Rachel Brosnahan and I have been texting each other what we were thinking of wearing,” Hinkle shared earlier on the event’s grey carpet. “Since we’re presenting together, I wanted it to be in the same world as what she was wearing.”

While nearly all CDG members wore black to honor the Time’s Up movement, most celebrities, who already did their part at the Golden Globes last month, opted for bright looks. “This a very fancy, very coral J. Mendel dress, which I love and thought was something really celebratory to celebrate all of the fanciful things I’m presenting for the Sci-Fi/Fantasy Film category,” said Camp. “I thought that this was appropriate for that kind of award. But I just found out that everyone is wearing black.” In addition to presenting, Camp attended in support of CDG president Salvador Perez, with whom she worked on “Pitch Perfect.”

Ane Crabtree, who took home the award for Excellence in Contemporary Television for her work on “The Handmaid’s Tale,” said she happily accommodated the last-minute request despite the fact that she’s currently shooting the show’s second season in Toronto and “was planning on wearing something crazy, like bright yellow and plaid and sequins.”

“Glow” costume designer Beth Morgan also proudly wore black. “Some of the leaders of the Costume Designers Guild are really involved in the movement,” explained the CDGA nominee. “We are a union of mainly women. It felt important to us all to wear black in support.”

For his part, “Phantom Thread” costume designer Mark Bridges wore a Time’s Up pin on his suit. Bridges is nominated for his work at next week’s Oscars. “I have to pinch myself whenever I go to the Oscar Nominees Luncheon because there I am in the same picture with Steven Spielberg and Meryl Streep,” said Bridges, who previously won for “The Artist” in 2012.